Home ⇒ 🎨Gauguin Paul ⇒ Description of the painting by Paul Gauguin Ah, are you jealous? 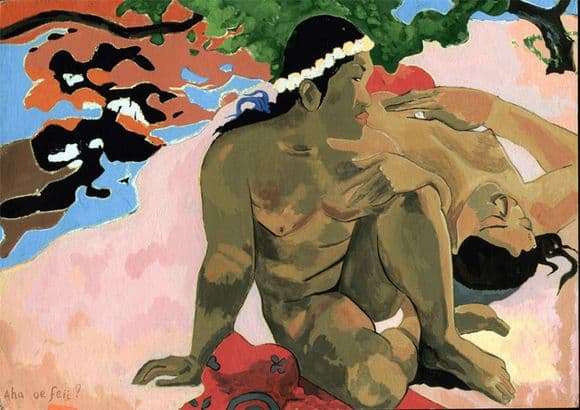 Gauguin is a traveler, a French postmodern artist, of those who denied the image of reality existing, which was written by realists, and the movements of the soul, which the Impressionists tried to capture, and instead of them they created in order to reveal certain immutable laws of the universe, its characteristic features.

Gauguin in his life traveled a lot. Up to seven years old, he lived with his mother in Peru, and for the rest of his life he remembered the unconcern, the customs, the climate, and he experienced in his soul a yoke to the south. Already as an adult, family man, he went to Tahiti, where he wrote almost eighty canvases, among which was “Ah, are you jealous?”, Which grew out of a scene he saw on the seashore.

Two aboriginal sisters, having bathed and settled on the shore, talked, rejoicing on a sunny, clear day and their own youth. Suddenly, among the memories, a controversial cut through caused one of the girls to sit on the sand and exclaim loudly: “Oh, you are jealous!”. From this, seen by chance, a piece of other people’s lives and grew a picture that Gauguin called at the time the best of those that were written by him.

The space of the picture seems endless. Blue-black-red spots of the sea merge with sand and a tree covering the girls from the sun. Dropped frivolously red dresses. One of the girls lies on the sand, lazily covering his stomach with his hand and narrowing his eyes, the second – obviously exclaiming – is sitting, looking at his sister. Her figure is traced more clearly, one hand on her knee, in her hair a wreath of white flowers, a blue ribbon woven into them.

Both girls are naked, but do not hesitate at all. In their world in nudity there is nothing shameful and strange – on the contrary, it would be strange to climb into the sea in clothes. Their bodies are cast with iridescent bronze, their faces bear all the features characteristic of the people of their people – a slightly flattened profile, narrowish eyes.