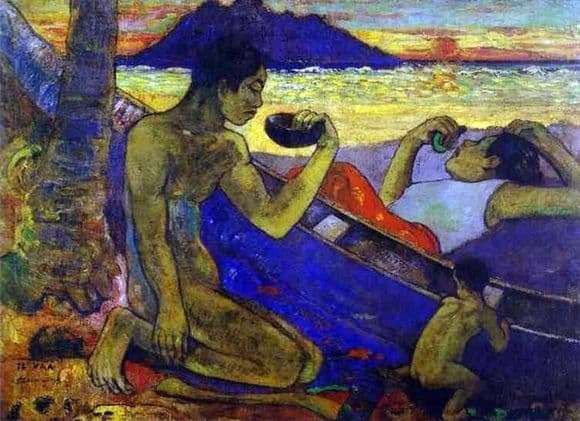 The work of Gauguin is something different from the usual realities. In his paintings there is a non-standard approach to color, lines and saturation in general. A similar approach to the work and became a distinguished style of the artist.

Another characteristic feature of Gauguin is a certain monumentality of his works. In other words, where movement would seem inevitable, peace and tranquility reign. The artist talked about this as a way to connect man with nature.

In all this, there is a protest by Gauguin, which can be justified if you get acquainted with his life.

He was born in a decent family of a journalist, got an education, traveled, after he got a job in a bank in France, got a wife and children, whom the artist had five. Later, Gauguin acquired a collection of paintings, which became for him the beginning of his creative path. It would seem that the standards of the bourgeois family are met. However, immediately after his passion for art, the artist leaves his work. Such a necessary measure spoke of the seriousness of his intentions in relation to creativity. But the lack of work made the man radically change his lifestyle. He leaves his wife and children in Copenhagen and leaves to wander in the truest sense of the word.

Speaking about the recognition of society, the artist achieved this only after death. He devoted his life to paints and canvases, painting the world in his own way. One of the clearest examples of such works was the painting “Pie”.

It is worth paying attention to the unnatural color of the elements: earth, sky, water. Human silhouettes in the work are depicted in the ancient Egyptian mood: here there is both simplicity of lines, and the image of the characters in profile, and the bent arm often found in the drawings of Egypt. This may also include unnatural poses. Such a vision of creativity and became the hallmark of Paul Gauguin, but only after many years.