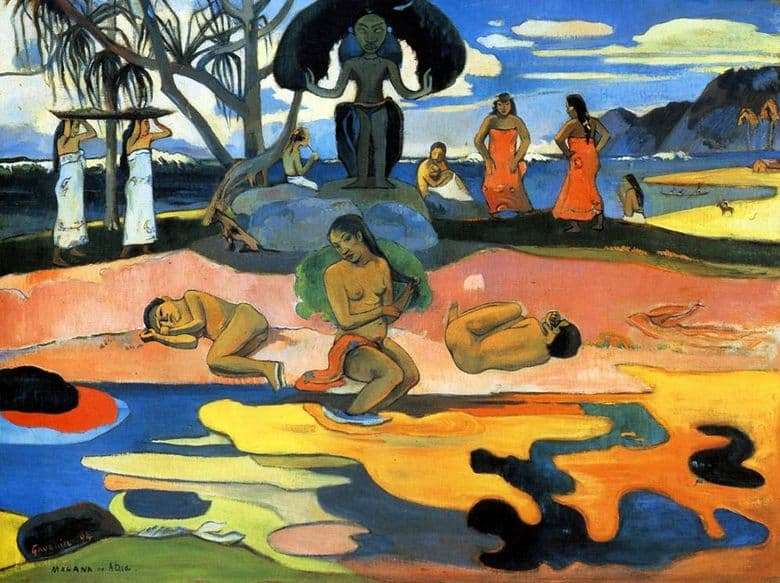 The painting “Day of the Deity” was written by Paul Gauguin in 1894 between the so-called “Tahitian” periods of his work. She is at the Chicago Institute of the Arts.

This picture has become part of Gauguin’s many years of research and his creative interpretation of Polynesian mythology. The main figure, called taaroa, is the central figure of the Maori pantheon, the creator of the world, about which the artist writes in his work “Ancien Culte Mahorie”. In honor of him, the two girls on the left bring, and the two girls on the right perform a ritual dance.

Here the inventiveness of the artist and his sources of inspiration are obvious. Repeating white clothes of Tahitian women, very reminiscent of Egyptian, dancing figures, as if hanging in the air, and a deity, depicted exactly in accordance with the myths that Gauguin so fascinated. Three naked figures in the foreground, apparently, personify creation, their languid poses (the figure on the right even is in a pose similar to the position of the embryo) testify to the overwhelming energy of the god behind them.

In the foreground are the curves of their figures and the headdress of God’s feathers. The water is filled with curious amoeba-like forms, which are probably rocks, and perhaps shadows, taken from nowhere. It can be assumed that these are simply decorative forms intended to give the composition its mood and rhythm. However, many art critics find here synthetic simplifications of photographs of Brittany made in 1888 and 1889. Gauguin stylizes them to almost complete abstraction.