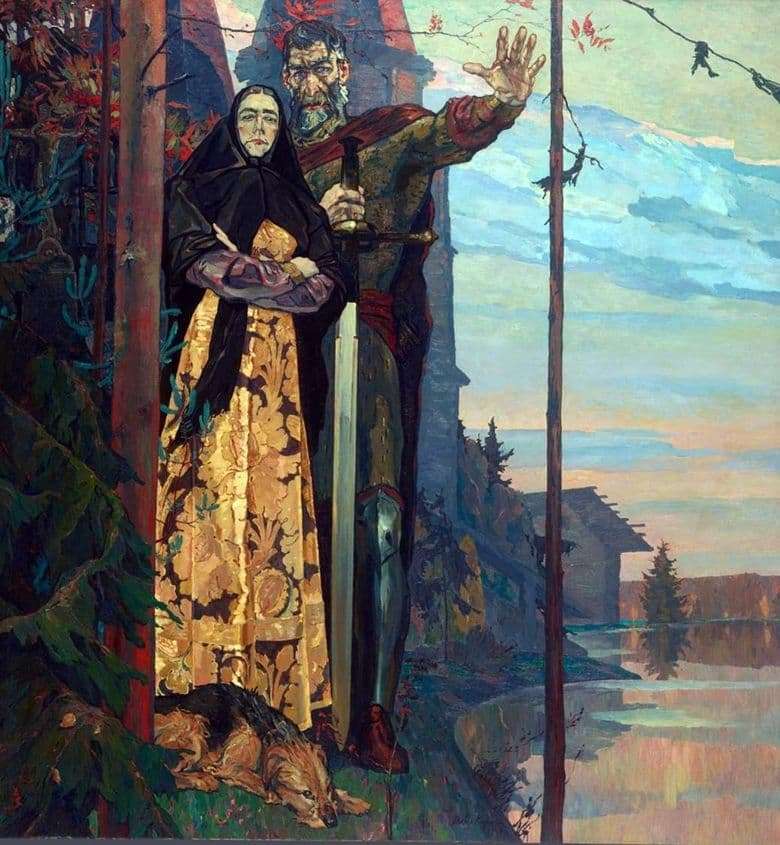 The canvas is the left part of the triptych “Alexander Nevsky.” In the years of the terrible war, the artist came very close to the historical theme, to the heroic past of the country, which always interested him, to the theme of the victories of Russian weapons. The artist was invariably attracted by a grand theme, filled with epic and philosophical meaning. The whole triptych is dedicated to one storyline – the preparation for the defeat of foreign invaders.

The mean and harsh composition of the left side, stretched vertically, looks stately and grand.

It depicts a warrior – a real Russian bogatyr of the old school, who is escorted to battle by a simple Russian woman. The canvas suggests the idea of ​​a brilliant history of our people, it shakes its energy emitted by the main characters, the characters of ancient legends, and the inexplicable beauty of the northern nature. A successful

composition almost equally distributes the space occupied by the figures of people and the serene evening landscape. The canvas creates the impression of expressiveness, balance, it marks the main idea of ​​the master to depict the grandeur and magnificence of the Russian people and his country.

The figures of a woman full of grandeur in a delightful folk dress and knight with a legendary damask sword are harmoniously combined with the landscape surrounding them. They seem to symbolize the best features of the people. A sundress with a golden floral ornament hints at the golden qualities of character peculiar to Russian women, and the black scarf confirms the difficulties that strengthened her soul. Arms crossed under the breast and a calm expression of the face show the dignity and imperturbability of the heroine. The sword in the hand of a bearded man, lowered at this moment down, does not threaten anyone. However, an arm extended forward seems to warn the enemy about the consequences of an attack.

The heroes of the picture stand on the bank of the river, to which a coniferous forest has risen, behind them there is a tower, then a building is seen, sinking in the mist of fog. The sky and the river, occupying the space of half a canvas, are painted with bright colors. In the sky above the sky floating clouds of azure, and the air above the river and the river itself are painted in pink shades of sunset. The picture evokes a feeling of confidence in the strength of the people and their victory over all enemies.