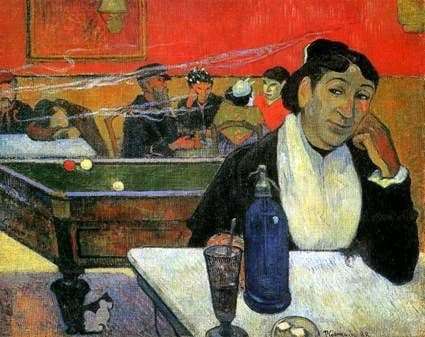 During his stay in the south of France, in Arles, Gauguin created several worthwhile works. He came here after inviting Van Gogh. This creative duet of famous artists gave the world similar paintings. The paintings depicted a station cafe in Arles.

Gauguin wrote his “Night Cafe in Arles”, without losing his artistic identity. The work of 1888 is relevant for its time. Feelings invested by the author in this picture will become clear now, after a century.

In the foreground we see the figure of a woman. This is the wife of the owner of the institution – Ms. Zhinu. She sits leaning on her arm, clearly bored. On the white tabletop stands an unfinished glass and a bottle. Paul Gauguin highlighted on the canvas bright color stripes that divide the picture into different compositional plans. The plan nearest to the viewer is painted in white. The middle of the picture is determined by the green color. Here, apart from the billiard table and the cat sitting under it, there is no one. The upper surface of the canvas is painted red. It depicts cafe visitors. They seem to merge into a single crowd, engulfed in one mood.

The artist depicted several familiar faces. This postman Roulin is a man with a beard sitting at the right table in the company of three ladies. A soldier in a red beret is sitting at the left table. Near him is a café that has fallen asleep.

Gauguin purposely wants to show the differences between a lonely woman in the foreground and people at a distance. He even added a lengthy strip of gray smoke between them. Mrs. Zhinu seems slightly tired, completely devoid of interest to other visitors. Her image on their background looks decent and restrained.

French artist in bold lines summed up all the objects in the picture. This gave expression to the plot.

The painting is in the Moscow Museum of Art named after A. Pushkin.