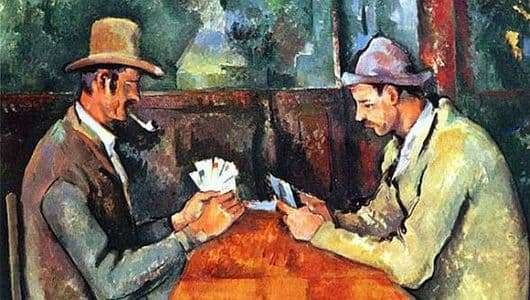 At the end of the 19th century, the French artist Paul Cezanne painted a series of paintings dedicated to the game of cards. They all came out under the same name – “Card Players”.

With each subsequent work, the author reduced the number of people depicted, and also removed unnecessary details from the canvas. As a result, the fifth picture became the most concise and at the same time the most famous of the entire series – a kind of final version of Cezanne’s work on this plot.

The heroes of the paintings were the French peasants, beloved by the artist, living in the land dear to his heart – in Provence. Cezanne captured the low-key and power-playing cards of two men sitting at a rough table in a local cafe. Apparently, he had the opportunity to observe and study these people well, thanks to the relative immobility in which they were in the process of the game.

At the same time, the artist managed to create expression on his canvas, to display the sensation of movement, thanks to gestures and different expressions of the characters’ faces. All this he bizarrely combined with his characteristic manner of monumentality. The plot is transmitted in a bright contrasting palette of colors, which brought into the picture a certain degree of vividness and everyday life. The background of the picture looks quite vague and blurry and does not look like a cafe wall at all, representing something abstract.

We see a kind of confrontation between two people, completely absorbed by the game of cards. As is commonly believed, cards are not an easy thing, they can tell the secrets of fate.

However, here the players use them according to their own will. By expressing their profiles, it can be understood that the heroes are deliberately considering the next move, which can decide not only the outcome of the game, but, like, their entire future fate. And this is by no means pathos, considering that people usually play with money for cards, and there are cases when the outcome of a card game determines the fate of a person.

In fact, this is happening before our eyes – the fate of people is being decided, and all this is being done in the most banal situation. Thus, despite all its simplicity, the characters seem to be filled with greatness. In this, perhaps, lies the deep symbolism and the special meaning of the picture.