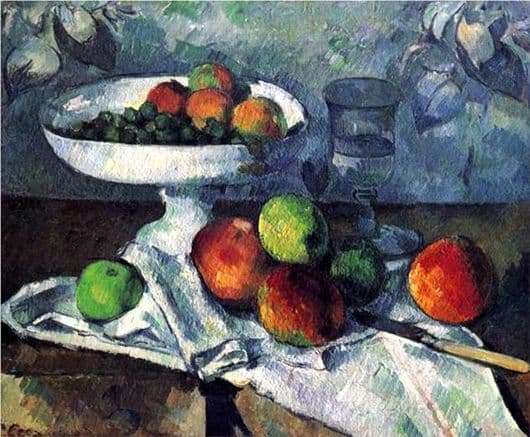 Still lifes of the famous French painter, Paul Cezanne are always recognizable. He became a pioneer in post-impressionism.

He wrote 59 canvases from the period from 1883-195, and by the end of the twentieth century he had become the full embodiment of the expression of this genre.

The most famous masters of impressionism took him as disciples, which radically influenced his further fate in self-realization in this direction. Under their influence, in the search for an individual style, he went much further than his teachers.

After learning the skillful skill of transmitting saturation and splendor of the state of nature, he began to study in depth the basics of shaping all the surrounding objects, plants and much more. He was interested in the internal logic of things, but his peculiar approach could not allow him to get deserved fame and success. Only later was he recognized for his dignity.

In still life, the work with color is most expressively reflected. Thus, a white tablecloth, like a snow cover, emphasizes the richness of natural gifts. An elegant white porcelain vase completes the picture and makes it complete all subjects.

White color always visually “tightens” the composition to the center and concentrates the view, introducing a certain rigor in its color scheme. It creates the impression of highlighting the fruit from the inside, creating a feeling of their reality.

He always sought to achieve the paramount value of natural gifts through the most simple examples of the image on the canvas.

The fruits painted in this picture are in the center of attention of the artist due to their simple but attractive forms of fruits, as well as their variety in type.

All the fruits that the master portrayed in his paintings caused a desire not to try them, but to try to recreate themselves as beautifully as he did.