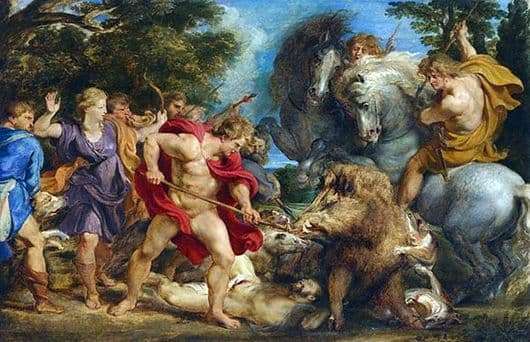 Or else this picture is called “Caledonian boar”. This story from Greek mythology inspired Rubens to write 4 canvases of a similar hunting scene for a wild boar, from different angles and at different moments of the hunt.

The Calydonian boar, a huge, ferocious and terrible beast, was the son of a Krommion pig. The name is associated with the town of Krommion, where the pig was outraged, destroying crops and killing ordinary people. Exhausted residents came to the aid of Theseus, who in a fierce battle defeated her. But she had a son, no less ferocious and bloodthirsty. He was sent by the offended goddess Artemis in response to the fact that the king, the ruler of Kapidon, Oneya, having sacrificed to all the gods, refused to return her offer

King Oneei and his beautiful consort Altea had a son Meleagr, a brave and strong young man. When the young man found out about all the horrors that a terrible beast was doing, he set about trying to defeat the Calydonian boar by any means.

Knowing the full degree of risk in this fight, Meleager convened the most courageous and skillful warriors from all over Greece. Also he was suddenly joined by a royal daughter, an amazingly beautiful girl named Atlanta, a brave hunter who lived in wild forests.

For ten whole days, the hunters tracked down a terrible boar. Finally, they all heard the noise and the crash, it was a boar with a growl and snoring, wading through the thick of the forest, breaking trees and bushes around it. And when the monster appeared before their eyes, they realized that it would be not just a hunt, but a real battle.

The movement of the masses, the pathos of gestures, fabrics fluttering in the wind, trees – everything is filled with life, expression. The picture shows the climax when Theseus drove a spear into the chest of a beast, driven away, grabbed by dogs and exhausted by wounds. Exhausted by hunting people, horses rearing up, with eyes popping out of their orbits and foam flowing from their mouths, the general tension, everything seemed to be frozen on the master’s canvas.