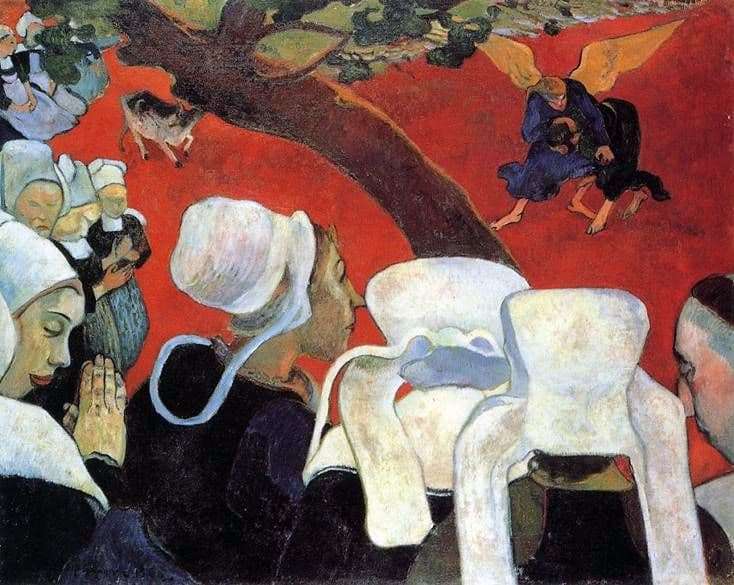 “Vision after the sermon” is the artist’s first work on faith. Gauguin wrote it under the great impression of the religiosity of the Breton women, whom we see on the canvas.

The picture attracts attention with its composition. It is as if divided diagonally by a tree trunk. This symbolic device, borrowed from the Japanese tradition, is designed to distinguish the lower part, where we observe women praying and the preacher, and the upper one, where the action takes place – the plot of Jacob’s struggle with the angel. Thus, the author wants to emphasize the opposition of the real world to the spiritual.

To Jacob, the hero of the book of Genesis, God descends in the form of an angel. A person struggles with him in an attempt to achieve blessings and forgiveness of his sins. Some sources claim that figuratively Jacob did not fight with God, but with his fear and distrust.

Despite the fact that female figures in national costumes are depicted in the foreground and occupy most of the canvas, attention is focused on the biblical motif. This effect is achieved by ad hoc contrast in the use of colors, dynamics, rhythm. The lower part is static and made in strict, repeating combinations of colors. Upper – energetic, bright and metaphorical.

In the upper left corner of the picture you can see a cow. Traditionally, ancient people sacrificed an animal, therefore this element duplicates the meaning of the biblical parable and symbolizes redemption and humility, a passionate desire to be forgiven.

Looking carefully at the faces of the people depicted, you will notice that the preacher is like Gauguin himself, and the woman, written in profile, the artist’s muse, Madeleine Bernard.

Currently, the work is stored in the National Gallery of Scotland in Edinburgh as one of the most recognizable works of the master, written in the style of synthetism.