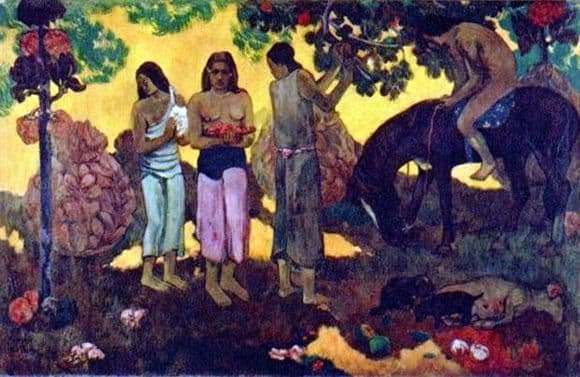 The materials for the creation of the work of Paul Gauguin “Collecting Fruits” served as canvas and oil, the size of the canvas is 128 by 190 cm. The French painter Gauguin wrote this canvas almost at the very end of his life, during his stay on the island of Tahiti.

The meaning of the work can be interpreted in different ways. One of the most common versions of the interpretation of its meaning is that the composition symbolizes paradise before the fall and after. As you can see at the first glance at the picture, you can divide it into two parts. In the left part there are women on a gold background, carrying in their hands various fruits and flowers, symbolizing fertility, abundance and well-being. Of course, this part of the picture personifies paradise.

What is characteristic of many paintings by Gauguin, in particular, and for the “Fruit Collection”, they use bright, clean colors, which allows you to create a feeling of sunshine without even depicting the sun and sky. Gauguin also likes simplified, stylized images. Without carefully tracing the features of the face, he copes with the task of creating a vivid impression of the characters.

On the right side of the picture are a naked man on a horse and a dog with offspring, as well as a character who is plucking a fruit from a tree. This part symbolizes a land full of temptations, human fall and paradise after it. In this half of the canvas, we see the birth and death of the example of a dog in the lower right corner.

If, looking at the left part of the work, the viewer experiences a blissful feeling of happiness and eternal pleasure, then, looking at the right, he realizes something else. Namely: nothing in this world is eternal, we are born and die, death is inevitable.

Gauguin’s paintings want to consider, look at the smallest details. Bright colors, confident, thick contour lines, expressiveness – this is all Gauguin. If the pictures had a volume, then his works can be compared with a scream. Goya francisco