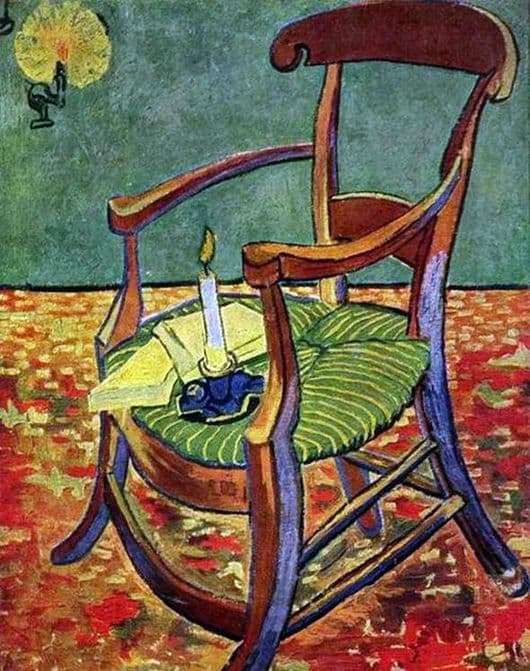 One of the most famous artists of the century was born in Holland. Since childhood, he was a quiet and insular child, and no one could have imagined that Van Gogh would reach the heights of life, be famous throughout the world, and the heritage from his paintings would be appreciated forever. He was ruled by an overwhelming desire to express his thoughts and assumptions about the meaning of life in his paintings.

Van Gogh almost through all his life carried friendship with the famous French artist Paul Gauguin. When the Frenchman arrived in Arles, in 1888, the friends lived together for two months. A similar interpretation of the unification of the owner of the chair was in addition to the work “Vincent’s chair with a pipe,” which was written in the same period of time. Through these canvases, the artist wanted to convey a prototype of himself and his friend, the difference between the two characters, and the chair and chair in the center of the room carried a meaning, as it were, the center of the universe. As the Master himself said: “A chair is the most necessary, main and most domestic piece of furniture.” Sitting on a chair, all the elements of the subject involve every part of the human body. The chair and the chair are non-living objects, and the place of a person is a symbol of the living. In the material area of it remains a trace.

The very idea of displaying “empty space” repeatedly appeared in the artist’s creative fantasies after an illness, when he realized that there was nothing left after a person’s death. If in the first picture the artist depicted a chair with an extinguished candle, here, sadly and lonely, is a chair with a funeral candlestick. The two canvases depict the absence of motives for a vividly expressed life position. After all, his only friend passed away, and with his departure, all the dreams and ideas of Van Gogh collapsed. After all, in addition to friendship,