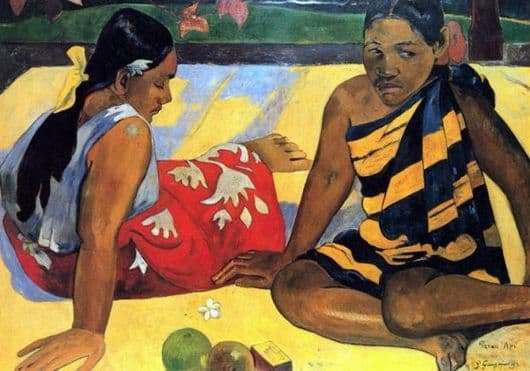 The history of this painting began in 1891, when Paul Gauguin decided to make an auction out of his works, and decided to go on a trip to an island called Tahiti with the money raised at the same time.

It was on this island that another series of paintings by Gauguin began. He was very disappointed in the colonial French system and therefore went to the very depths of the island, which was less susceptible to civilization and its beginnings.

During this period, a number of paintings were written, which were successfully enough appreciated by critics of all time, but soon Gauguin was forced to go back to the French capital, due to the fact that he was sick, and there was catastrophically not enough money. After two years, he comes back and starts his work. The picture shows the image of two women who, despite everything, are in harmony with nature, who are in their paradise on earth and are not worried about civilization and changes in the surrounding world in this regard. This work describes the ideal life of these girls, which does not depend not on space, not on time.

The work is similar to the frieze compositions of the decorative plan. There is not a hint of a smile on the faces of these girls, but this does not mean at all that they are not happy, most likely they don’t know what it is. They are dressed in national clothes and apparently just relax without thinking about something high and eternal.

This is exactly the beauty of such a picture, which captures these two young ladies in the everyday moment of their life. Due to this originality, with the help of this picture, the viewer can feel life and the situation as it really is, sad, without excesses, but a bit strange, relative to the position of the viewer.