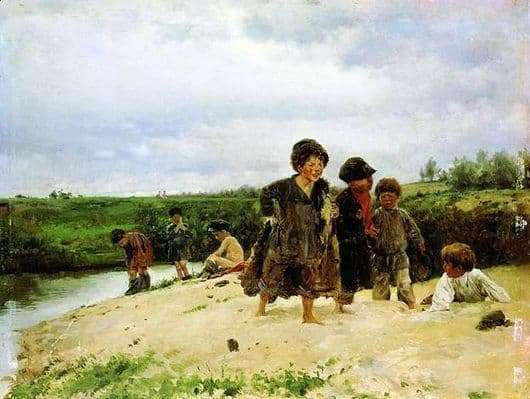 The rain had not yet spilled, but in the air it already smells fresh, because of the grove there were clouds, which means we must hurry. So thinks the central character of Vladimir Makovsky’s painting “From the Rain”. This guy is in the center of the canvas. His facial features make out the grove of everything. The boy is curly, he has a piercing and cheerful look, a nose with a small potato and bright lips. He smiles so slyly and arrogantly, as if he has made some kind of victory.

There are only seven children in the picture, only three are in the background. They dress up slowly, as if deciding whether it is worth it to put on pants and shirts after bathing in the river, because it’s still wetting them with rain. They continue to look at the water, as if they want to catch another swim.

But the main instigator has already dressed and is going to stomp home. There is not a shadow of fear of rain on his face, and even with a thunderstorm there will be, but is this a reason for such a daredevil to be afraid. Near his faithful friend, who pulls his younger brother or friend from the shore.

For some reason he is crying and does not want to leave, he still does not understand that it is necessary to have time to hide from the rain. Another boy stuck in the river sand. It may well be that he got it right from those guys that are bigger, for bringing the little boy to tears. There are also such quarrels in boys, but after the rain everything will be forgotten, everyone will make up and start bathing in the river again.

And far, far away – two more running figures. Perhaps these are girls who run away from the rain, who swam elsewhere, away from teasers and fighters, which they consider to be boys. Above the girls is still seen the blue sky, which will soon tighten the lead clouds. But it is this gap that gives the picture a good mood. The same as written on the face of the blushing leader of the gang.