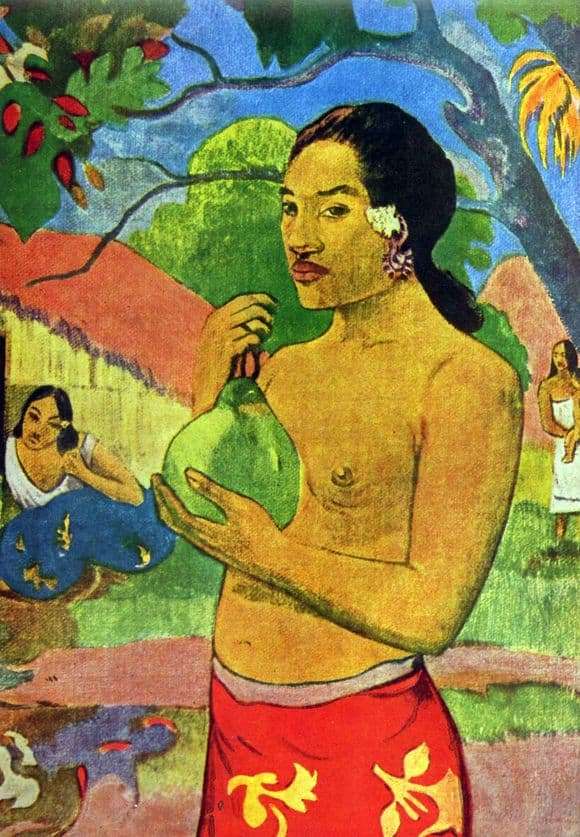 This picture Gauguin painted while on the island of Tahiti. In the background are two ordinary huts, located in the settlement of the islanders. In the foreground is a young woman, a Tahitian, holding a fruit in her hands. This fruit is a mango, differing lemon-green color. Many critics point out that the fruit itself resembles a vessel, and some researchers of the artist’s work are confident that this is a real vessel for water carved in a pumpkin. Thus, a woman, perhaps, is going to go for water, holding the vessel by the rope, located on top of the fetus.

According to a certain version, the heroine of the picture is a young Tahitian Tehoura, who was the wife of Gauguin, but the wedding ceremony did not take place between them. Her face has expressive features, a serious and focused look. She has dark skin, painted in golden – brown colors and standing out against the general background of the picture. The silhouette of her body is described by a clear line, thanks to which she appears voluminous and expressive. The landscape, located behind the woman, looks quite flat and generalized.

The artist did not depict either the rays of the sun or the mobility of air. On the contrary, the whole picture is saturated with tropical heat, which filled the huts, grass and trees, and also froze on the skin of an islander, wearing a skirt in rich red color. The figure depicted on her clothes blends in with the leaf patterns on the trees. This gives it a certain mystery, making it an integral part of the surrounding nature. The picture is notable for its special poetry, being saturated with bright colors and exotic motifs. One feels a strong bond between people and nature, seemingly eternal and inseparable. According to rumors, the woman was pregnant by Gauguin, as hinted at by the fruit that she holds in her hands.