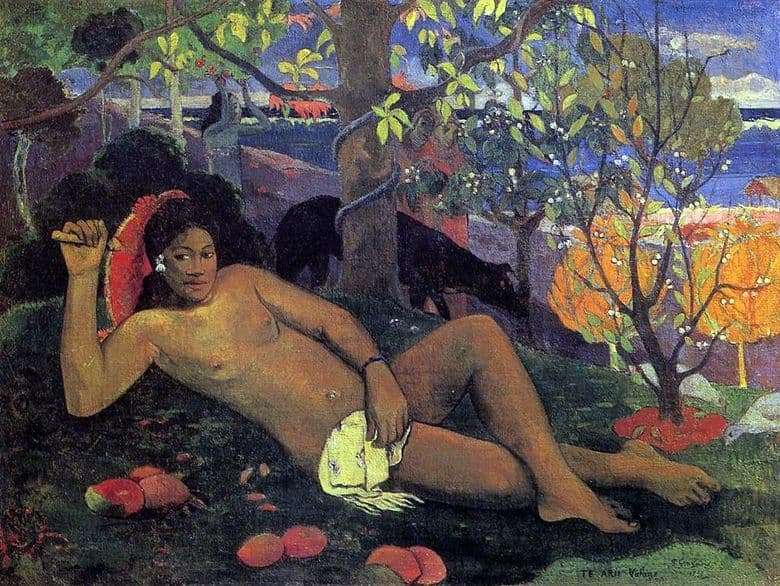 Paul Gauguin, the son of a French journalist and a Peruvian creolca from a wealthy family, spent his childhood in Peru, in the family of his mother. Bright outfits of the natives of South America, the looseness of their behavior, unusual nature were the first impressions of the future painter’s childhood and partly shaped his inner world, giving a positive charge for the rest of his life. After graduating from school and the Nautical School in France, successfully creating a family, making a fortune and traveling around the world, Paul, nevertheless, felt a strong craving for exotic places – like the one where he spent his childhood.

Gauguin called civilization and all its signs a “disease”. The first trip to Tahiti gave a tired man to life all that he lacked in the civilized world. Returning to France, he brought with him more than eighty canvases, but not finding success and recognition, he returned to Polynesia. Paul Gauguin became the first painter in Europe to renounce realism in favor of primitivism and naive painting in order to get closer to nature.

The painting “The Wife of the King” was written by Gauguin during his second trip to Tahiti and is one of the most significant works of the artist. This canvas is an open challenge to European traditions of painting and, perhaps, even a kind of mockery of these. The pose of the beautiful Tahitian woman exactly repeats the pose of Olympia from the eponymous painting by Manet and partly copies Titian’s “Venus of Urbine”. However, Gauguin does not fix the viewer’s attention on one particular myth, filling his plot with multiple signs and symbols.

In the background we can see the tree of knowledge (the tree of good and evil), which is a direct reference to the Old Testament, and old men talking, barely visible in the shade of trees. Tahitian Eve is preparing to taste the fruit that will give her knowledge – bright red fruits lie at the girl’s feet, a young maid gathers fresh fruit from the branches. Tehura, the wife of Gauguin, is guessed in the outline of the woman from the portrait – thus, portraying her as Eve, he sees himself as Adam.

The big red fan in the hand of the Tahitian woman also speaks in favor of the version about the portrait of the artist’s wife – Paul has already portrayed Tekhuru with this fan, which, most likely, was her favorite accessory. Significantly and the name of the picture – calling his wife the queen, the artist imagines himself a royal person, the king of painting or the white king of Tahiti. In addition, the creator consciously simplifies the forms as far as possible – in contrast to “Olympia” and “Venus Urbinskaya” with their detailed, thoroughly prescribed bodies, Gauguin draws his beloved as a naked woman would paint a child.

The absence of all modesty, the triumph of the beauty of the naked body is a characteristic feature of the late portraits of Gauguin. Having gone to Polynesia with a “one-way ticket,” he openly protested against any civilization and admired the naturalness and naivety of Aboriginal people who did not know a sense of shame. Such behavior of the locals reminded the creator of the primeval biblical paradise – and he considered Tahiti a true paradise on Earth. Small details of the picture also speak in favor of the Old Testament version. “Trees in bloom, dog dogging, on the right, two pigeons coo,” the author wrote about his creation. “The King’s Wife” demonstrates the amazing unity of man with nature. Bright, rich colors evoke a feeling of tropical heat, the eternal equatorial summer. Gauguin shows the viewer a world that has not been touched by evil and over which civilization has no power.