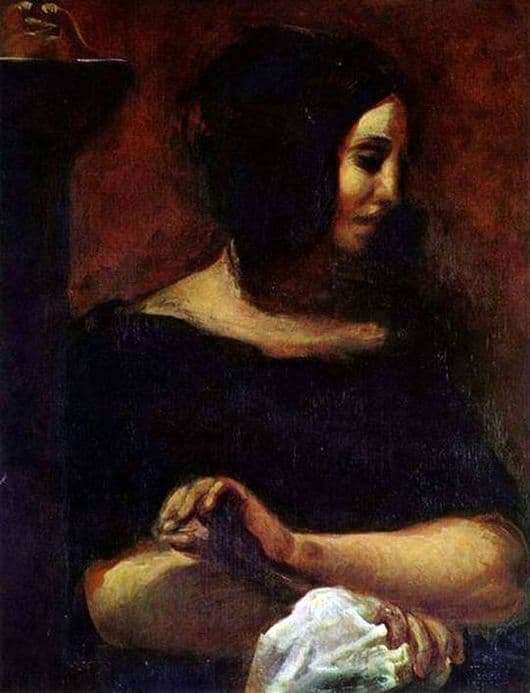 Before us is a fragment of a once whole picture depicting George Sand and Frederic Chopin. He met the French writer Delacroix at the end of 1833, and the result of this meeting was a long friendship not without a hint of mutual sympathy.

The artist liked the independence of the woman, her resistance to any attempt to impose someone else’s will. Once, when he saw Sand and Chopin together, the artist decided to turn to the portrait genre and recreate this meeting on canvas.

However, in this form the picture was not destined to long exist. For the sake of profit, the greedy owners decided on unheard of barbarism, cutting the picture in half. Thus, one part – with the image of Chopin – is located in the Louvre, and the other – on which George Sand is captured – is now stored in Denmark. And only thanks to the reconstruction, we can understand how the masterpiece looked originally.

Pay attention to the portrait of a French writer. For Delacroix, the norms of academic art were never in the first place; This was manifested in the image of George Sand – expressively expressive. There is a landscape-mood, but, apparently, art historians somewhere have miscalculated, without specifying the genre to which this picture belongs – a portrait-mood.

At the same time, the canvas is not distinguished by an abundance of bright colors; on the contrary, the Delacruat tones used are very soft, hushed, so to speak. The very same mood is created in planes inaccessible to the viewer, somewhere gradually.

Perhaps this emotional stress manifests itself in a special turn of the heroine’s head. And perhaps, the mood is betrayed by the writer’s arm raised in spite of will. And in such an immersiveness of the heroine in herself there is nothing surprising, because at the time of her image a woman could hear almost the greatest thing that ever existed on earth – the music of Chopin.