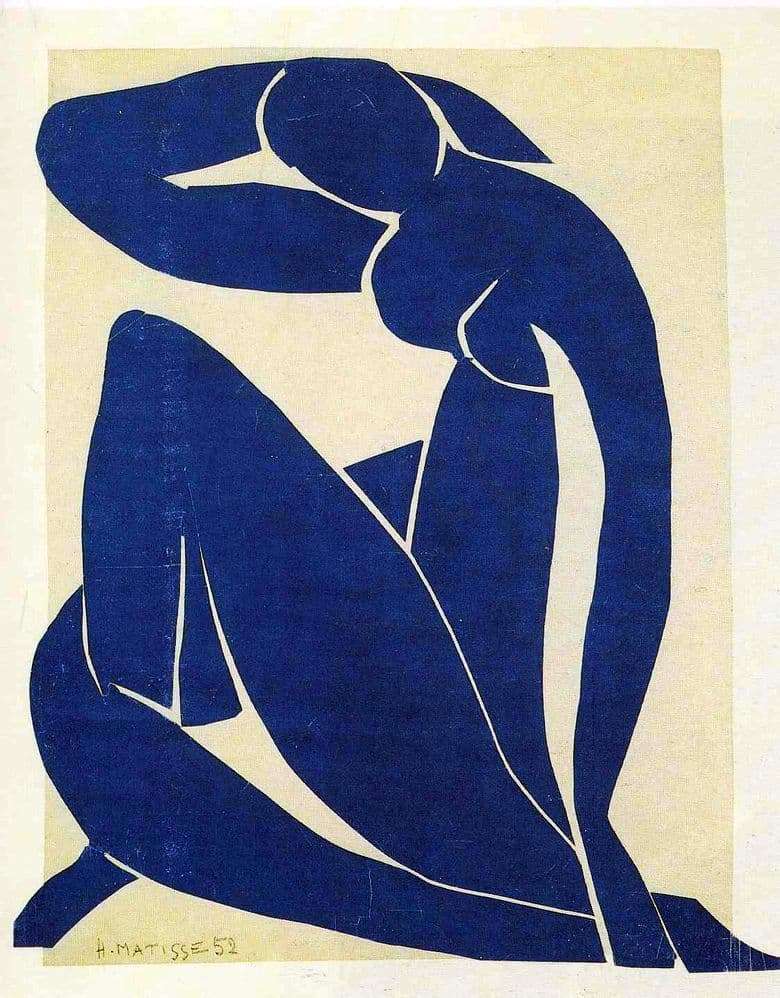 In 1952, Matisse finished working on a series of canvases that had a common name – “Blue Nude”. The canvases depicted a female figure, which was skillfully combined with abstract designs and shapes. The artist loved to depict the female body in space in the same position – the figure always had crossed legs, with its arms thrown back.

The picture is remarkable for its harmony. The canvas successfully combines white with blue, while their intricate weave with a successful arrangement of parts turn into a female silhouette, slightly distorted. Matisse loved the appliqué; it allowed him to immediately fill the entire shape with the color he needed. It is impossible to remove one color here – then the whole harmony will be broken, the whole work will become meaningless. The picture is similar to an intricate sculpture, which managed to transform into a two-dimensional image.

Looking at the work “Blue Nude”, the viewer feels only a feeling of purity, harmony, lightness. Everything in the picture is so balanced that you can look at it endlessly. It is impossible to imagine today the canvas in another version of the image, the white spots complement the blue color so harmoniously that, if they are removed, all harmony and lightness will disappear.

The impact of the work “Blue Nude” on the viewer is like contemplation of sculptures, which are made of lightweight, weightless material. As the author himself believed, he wanted to convey to his admirers the feeling of joy that painters and sculptors themselves experience. It was important for Matisse to create a feeling of fusion of the painting itself directly with the base, with the canvas on which he painted it.

“Blue Nude” – was one of the last works at the end of his work. She gave it is not easy. Before you finish the picture, Matisse had to chop up a large number of sketches and sketches of his notebook. This proves the fact that the artist did not have enough to complete the work of the desired piece of fragment.