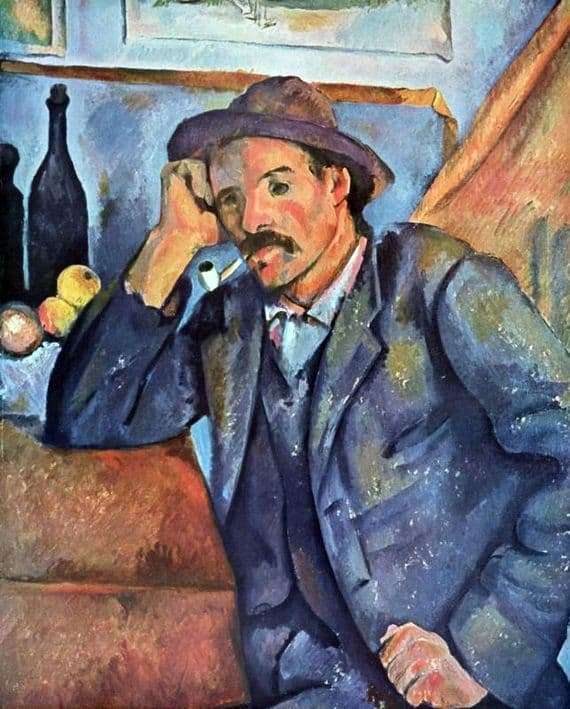 Paul Cezanne – the great French painter, one of the largest representatives of post-impressionism.

In this picture, the artist seeks to show his rich inner world to all the people who surround him, the whole gamut of human nature. Looking at this not quite young man, we can immediately see his tired look, which is rapidly looking away into the distance. At first glance, you might think that he is very much concerned about something, but on the other hand we see just ordinary human eyes with a blank look. You can also see in him the courage, perseverance and all the power of the human spirit. The man decided to sit down to rest after a long day of work and light a pipe. He so easily supports his head with his hand with the hope of a better future, it seems that only the tube saves him.

In this picture, the artist uses mostly dark colors, because he wants to emphasize a man’s dark blue suit, a hat covering a man’s dark hair, as well as objects that surround him, a table and fruits lying on it, a bottle. Looking at a man with a pipe, we see in him the author of the work.

Paul Cezanne put his whole soul into this picture, thereby seeking to show all the burdens of life. The left hand of the man is clenched into a fist, strong and manly. The man depicted in the picture is similar to both the peasant and the thinking sage. In the eyes you can see loneliness, havoc, the man tries to understand the meaning of life.

The picture is filled with the author’s internal energy, insurmountable spiritual contradictions, and the fear of not being able to show people their own vision, but this is confirmed by the example of Paul Cézanne’s Man with a Pipe.