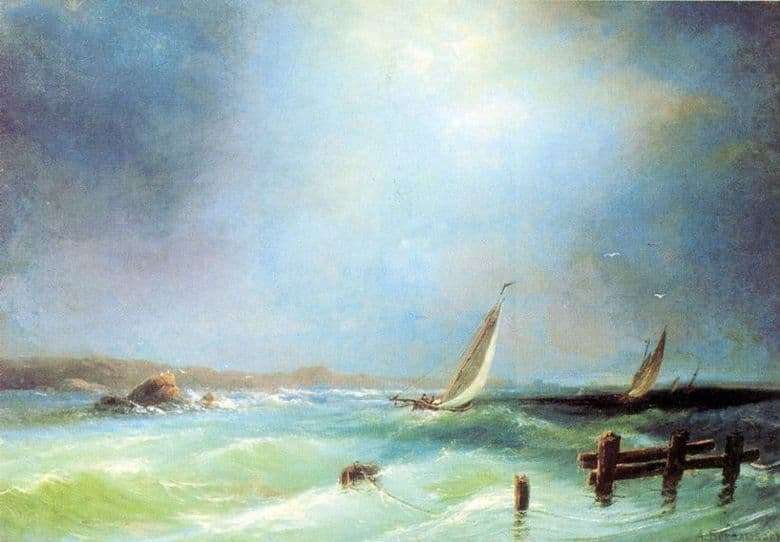 Marina, translated from Italian, is a painting that depicts the sea. In France, even created the official title of painter of the Navy. This title is given to outstanding painters who love to depict the sea on their canvases. AP Bogolyubov is one of the outstanding artists who proudly can carry this title.

Bogolyubov began to get involved in painting while studying at the Naval Cadet Corps in St. Petersburg. A great influence on the future paintings of Bogolyubov, had a great artist – I. Aivazovsky. It is under the influence of his paintings, Alexey begins to write marinas in the spirit of romanticism. Since 1853, he wrote a large number of canvases that are devoted to the history of the navy of Russia. Thanks to this series, he became an outstanding historiographer, marine painter.

A. Bogolyubov, having fallen under the influence of the Barbizon school, began to use their traditions – the mood of his paintings farther and farther were simpler, the colors (which united the general tone) were more refined. At the same time, he did not lose his manner of conveying the landscape in the picture for what it is. His last works have become more performed in the manner of impressionism.

The work of the painter is closely connected with the ideological and realistic art of Russian peredvizhniki artists.

In 1885, in Saratov, with the assistance of Bogolyubov, an art museum named after A. N. Radishchev (grandfather of Bogolyubov) was created. A short time later, a drawing school was opened at the museum.

The artist died in Paris, buried in St. Petersburg.