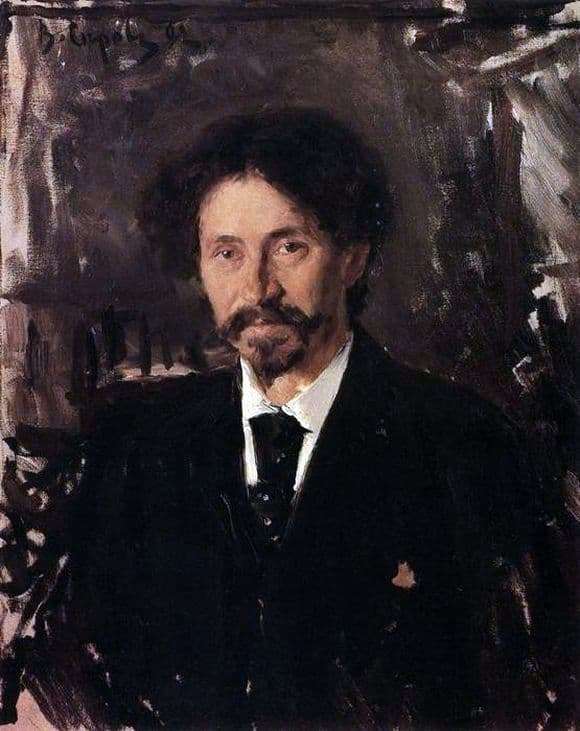 An outstanding artist of his time and his generation, Valentin Serov lived and worked in the XIX-XX centuries. During his work, he wrote a lot of different pictures, but at first Serov was engaged in writing portraits and paintings to order. At the expense of his work on order, he became one of the most talented and outstanding portrait painters of his era.

Among his paintings, portraits there is a portrait of his friend and colleague Ilya Repin. Valentin Serov completed his work a little more than one century ago – in 1901. This artwork was written in, of course, the genre of realism. The picture was not written in vain – Repin really meant a lot to Serov.

And this story began in 1874, when the mother of a young artist, seeing the talent of her son, took him to Paris. This year in Paris he lived, worked and worked Repin, who eventually became the very first mentor and teacher for the future portrait painter.

After some time, the artist’s mother met with the patron. The result of this relationship was that she took Valentina Serova, who was still young and not very experienced, in Abramtsevo. There he began to learn Repin, Polenov and Vasnetsov. But the greatest influence on him again had Repin, who earned the trust and favor of the guy earlier.

True, their friendship was not so long, and broke off a few years after the artist painted a picture-portrait of his first teacher, mentor and master. This happened because of after 1905, when Serov changed a lot and became sullen, quick-tempered. Because of his changed character, he completely abandoned the title of academician. This was the end of the friendship between the two artists. Nevertheless, the portrait of Repin, painted with a talented hand of Serov, still amazes the minds of the creative figures of our time.