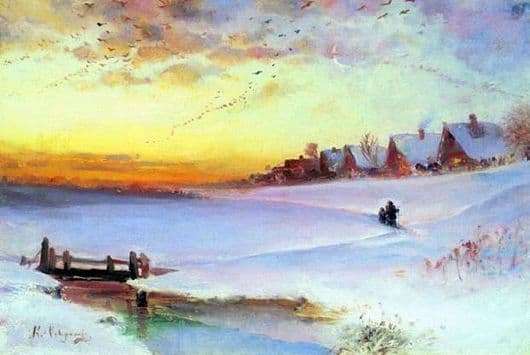 Eh, winter is beautiful in the open spaces of the Russian land! Such beauty is rarely seen. And with our modern technology and life too advanced and you will not notice at all. But one has only to go out of town, a little farther than all the highways. Just turn on the road forgotten by cars and you get here in about such magnificence. There are still places in our outback when in the winter evening the sun, leaving for the night, leaves something pink-red in the sky.

They say it is to extreme cold. But judging by the canvas, it’s not hot here anyway. Snowdrifts of snow, but the stream did not freeze here. Covered with only a weak crust of snow. In the distance you can see a village, to which a path in snowdrifts has already been trodden.

Late peasants rush to the houses, and in the sky flocks of birds fly to the forest, they also hurry for the night. Already slowly begins to darken, even the snow loses its whiteness and becomes some kind of white and blue. Winter fully captured nature, completely took power in their snowy hands. But the one who lives in the village is not scary. Since the fall, firewood has been harvested – they are not frozen, the products are delivered or grown in the garden – they are not starved. True work has become less, but there is a lot to do around the house. And spring is not so far, only some three months of cold.

In such weather peasants always found something to do in the evenings. It happened that they were going to the huts and told each other stories. And it happened, if there was someone competent, they were going to listen to how he reads either a book or some newspaper. Over time, the radio began to gather to listen, but as television appeared so all over their huts and fled. That’s how it is! It turns out that all modern is ruined by simple communication.

Savrasov and then did not embellish anything, but portrayed as it is. All the beauty of the Russian winter evenings showed. You look at all this and you wonder.