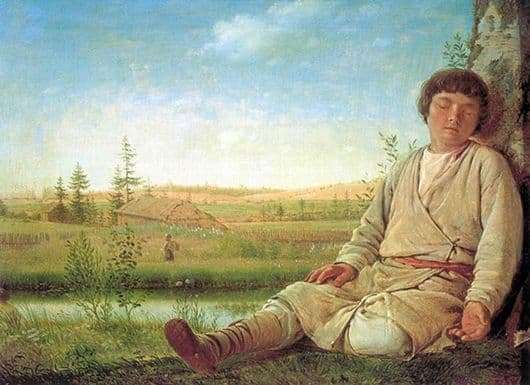 Venetsianov Alexey Gavrilovich is a sign figure in the history of Russian painting. Amazingly, he, who had never studied at the Academy of Arts, managed not only to occupy a prominent place in the pleiad of artists, but also to create a new direction in his art form.

Venetsianov was one of the first to turn his attention to the life and life of ordinary people. It was in this environment that he drew inspiration for his masterpieces. Of course, the peasants were portrayed even before Venetsianov, but no one did this with such love and careful attitude to the details of real people’s life. Before that, artists often embellished reality, creating idealized images of peasants. All this resembled the bucolic canvases of French painters, depicting sentimental scenes from the lives of shepherds and shepherds.

Venetsians, on the other hand, were keenly interested in the real life of the peasants, in the details of their everyday life, in their daily activities. All this he transferred to his paintings.

One of them is the Sleeping Shepherd. The plot is simple and unpretentious. Before us is a typical summer day in the countryside, of which there are so many in Russia. The horizon line is clearly divided into two almost equal parts. At the bottom – a juicy, bright green grass and a ribbon of a stream or a small river, and at the top – the blue of the sky, diluted by the whiteness of light clouds.

The artist portrayed indifferent, but such native peasant houses with crooked fences. Along the river bank is a peasant. In the foreground on the right is a sleeping boy-cowherd boy, who gave the name to the whole picture.

He leaned on the trunk of a birch. The pose of the child is full of peace and relaxation, the leg stretched forward balances the composition of the picture. Without this detail, the boy’s figure would look more bulky and outweigh all other details.

The cowgirl’s expression on the face was also calm and serene, the right hand in a dream turned palm up. The boy is dressed in the usual homespun clothes for the peasants. Gives the origin of the hero and bast shoes, as well as hairstyle.

The picture is filled with light, it is surprisingly tender and lyrical, despite the ordinariness of the plot depicted on it.