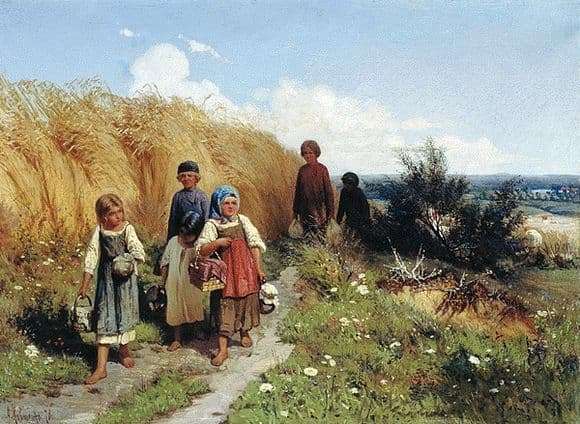 Alexey Kivshenko was born in the family of a serf earl Sheremetyevo in the village of Serebryanyye Prudy of the Tula province, but thanks to his father’s many talents and the count’s favorable attitude towards him, the boy began to develop his talent for painting early in the St. Petersburg Drawing School. Then, while studying at the Academy of Arts, in order to receive a pension trip, he wrote to order his famous “Military Council in Fili”, which glorified him as a master of expressive compositions and historical believability.

Kivshenko worked superbly not only with oil, but with watercolor, which served most of his many illustrations of literary works in print. His battle scenes, hunting scenes, the presentation of various historical events of Russia and European countries always differ in their special saturated color, naturalness of images and harmonious presentation of characters in different landscapes.

With a special thrill and love, the artist paints pictures with scenes of rural life. Especially the artist succeeds in the painting “Zhnitvo”, depicting peasant children carrying lunch to the reapers on the field. Most of the picture is taken by a clear blue sky, dried to dazzling brightness by the hot summer sun, and high thick wheat, rising like a golden wall above the heads of children walking slowly along the path. Unpretentious outfits of children, rare wildflowers, dried shrubs at the edge of the field look so picturesque that they look like precious stones on expensive embroidered outfits. The faces of the summer are carefree and cheerful, they peer into the distance in a businesslike manner and quietly discuss something.

For his contribution to Russian painting, Alexei Kivshenko was awarded several gold and silver medals, received the title of academician, and led the battle department in an art school. The style of work was most close to the Russian progressive Wanderers.