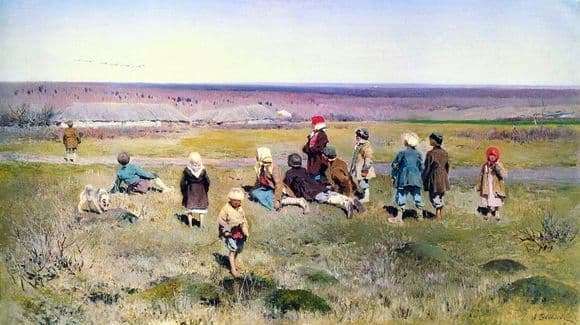 The famous painting of the artist from the association of the Wanderers Alexei Stepanov written in 1891. The painting depicts village children, as evidenced by the characteristic clothes of the late 19th century – sandals, onuchi, and knitted scarves.

It is early spring in the yard, around Central Russian plain landscape and cranes are returning to their native lands. The children look after them, seeing off. Apparently, they walk and communicate, judging by their position in the lap of nature.

Children feel comfortable in this environment and perceive the fact of changing the state of nature with curiosity and knowledge. The work is unique in that it has a living system and composition, conveys lost emotions – communication with nature, existence with it, it is also a source of knowledge and hospitality for them.

The best animal painter after Serov, Alexey Stepanov, appeared as an artist in the paintings of Russian nature and life. In a minor and simple sought deep meaning. In his works, it is difficult to determine which direction the artist professes: landscape or genre painting.

The painting “Cranes fly” was greeted with admiration and, as critics of the time noted, “the previous achievements were focused in it and the future path of the author was determined”.

But the success of this picture was due to the love of peasant children who gathered on a hillock, warmed by sunlight. Traveling along the Oka, Kama and Volga, the artist saw many such children and spoke cordially about them and about nature on canvas.

In one of his walks, coming out of the grove, he came across a flock of children in the meadow and saw flying cranes in the sky, began to write a better picture.