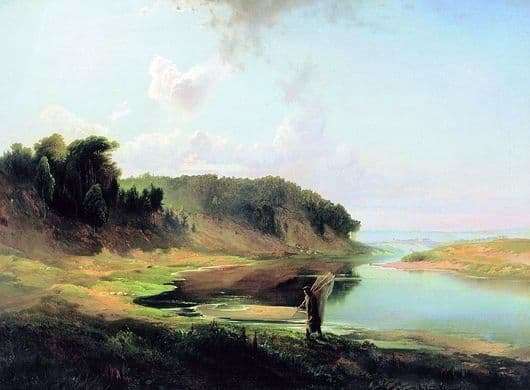 “Landscape with a river and a fisherman” was written by the famous Russian landscape painter A. Savrasov in 1859. This picture is a significant stage in his work and self-development. The eyes of the viewer appear the bank of the Moscow River. Savrasov paints a landscape from nature, being in the Moscow region, near the village of Arkhangelsk.

The canvas depicts a quiet summer morning. The coolness of the morning, the freshness is still opposed to the approaching heat. The foreground of the picture is in deep dark shadow, the sun still rises. Further in the first sun the coast and its yellow sand is visible. On the left, a steep bank of the river is written, it is thick with various trees. The river bend is depicted – wide, calm and clean. It seems that the flow has stopped, as if not yet awake.

Trees growing on the shore are visible in the reflection of the smooth surface of the water. In the background, the picture shows the opposite bank of the Moscow River. The coast is hilly. A little farther out there is a forest. The sky is clear blue, with thick clouds frozen in it. The picture is as if pierced with light, there is a lot of air in it and it is almost palpable. Savrasov himself said that it is important to prescribe air in the landscape. And how not great do not register the landscape and trees, without air you get a bad landscape.

In the foreground the canvas is a lonely wandering fisherman with his catch and tackle. It seems negligible in comparison with the vast nature and the river. The picture demonstrates the importance of nature, its predominance over the human world. The fisherman is calm and slow, he does not disturb the peace of nature, the river and the trees reflected in it. The picture is calm early morning.

The color shades used by the artist in this picture are mostly light and delicate (not counting the shadows). The contrast of colors, though present, is harmonious. The artist himself was a sensitive and lyrical person, who successfully transferred to the canvas.