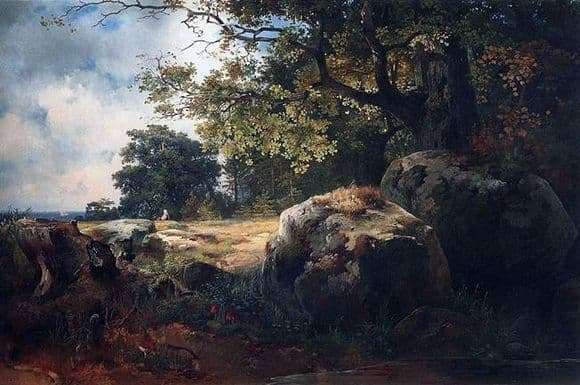 At an art exhibition in Moscow, which took place in 1854, visited Princess Maria Nikolaevna. She then liked some of the work of the young Alexei Savrasov. And then the princess on the rights of the president of the Imperial Academy of Arts announced to the artist an invitation to his residence.

There was a country representation between Peterhof and Oranienbaum. It is in this picturesque place, on the border between Russia and Finland, roNew unique canvases by Alexei Kondratievich were presented Among them is the work “View in the vicinity of Oranienbaum”.

Before the viewer appears landscape. The corner of nature, captured by the artist’s attention, seems familiar, but still there is some mystery in these outlines. Muffled, even gloomy shades of the canvas create an atmosphere of mystery. It seems that it was here that ancient myths were born and fabulous events took place. Finnish nature – harsh, stately, mysterious. The painter accurately conveyed its unique atmosphere.

In the foreground are two huge age-old boulders. Over the centuries, they are overgrown with moss and grass. Above the boulders are branches of a sprawling old oak tree. It is covered with thick light green foliage. In the left part of the picture – a tremendous stump. One can only guess whether nature itself or the person ruling over it has cut down a tree that once blossomed in its place.

In the center of the picture – on the glade – a female figure is guessed. Even further, on the horizon, stretches the sea, with a white sailboat whitening in its depths. The blue sky is almost entirely stained by clouds and gray clouds. But the sunlight still makes its way through them, flooding the picture before the viewer with warm light.

Landscape Oranienbaum acquired Tretyakov, and placed in his Moscow gallery. This canvas gave Savrasov the title of academician.