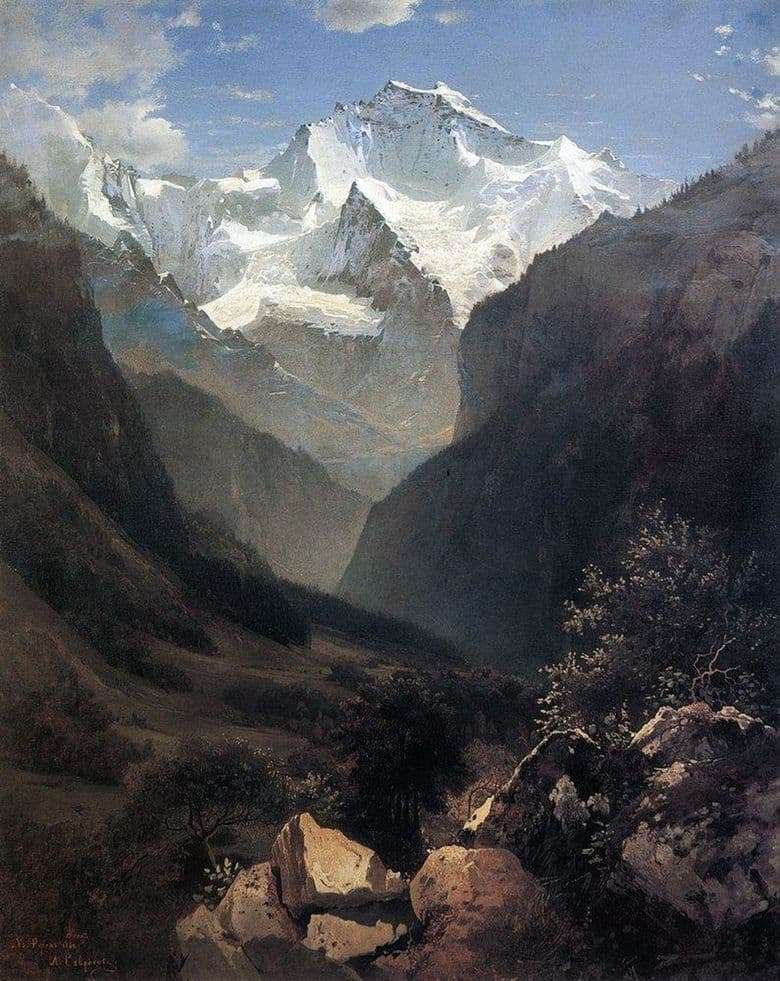 Alexey Savrasov was born in the family of a merchant of the third Guild, but did not continue his father’s work. The boy had an early ability to draw, which was extremely dissatisfied with his father. However, when the work of Alexei began to be sold, he changed his mind about the future creative activity of his son.

The author’s early works were not always recognized as high criticism, but even critics invariably noted the vitality of the moments captured by the young artist. The author was haunted by a series of family tragedies – his two daughters died, the artist began to drink, his family broke up. Brilliant successes in the work combined with the tragic events in life. Gradually, Savrasov completely disappears into his experiences, his work becomes gloomy and hopeless.

The painting “View in the Swiss Alps” was written in 1862, when numerous sorrows still influenced the painting of the author. During this period, the artist traveled to Switzerland, where he wrote with pleasure mountain landscapes. On this canvas, the artist, using an excellent knowledge of perspective, managed to convincingly convey the depth of the gorge and the height of a distant snow-covered peak – the picture seems to be voluminous.

Through the dark frame of the mountains depicted on the middle ground, the viewer’s eye rushes forward and upward, where, against the background of a soft blue, transparent sky with light clouds, the peak of Little Ruchen rises, dazzling white, radiant, inaccessible. Sunlit yellow stones in the foreground and dark green bushes stretching into the distance along the gorge create the necessary sense of volume; the sun also falls on the individual leaves of the bushes, highlighting them with a living golden mosaic. The picture is rich in colors; it is present and lightness, and airiness, and materiality. The beauty of the Swiss Alps is transmitted by Savrasov with love and skill.