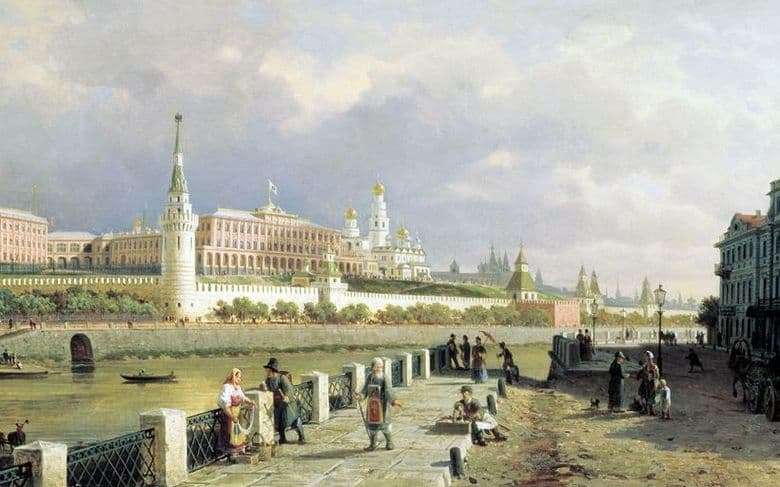 Petr Petrovich Vereshchagin (1834-1886) was a Russian landscape painter of the nineteenth century, the author of numerous panoramic views and everyday sketches. Born in the city of Perm, traveled a lot. His brushes belong to landscape images of various places in the Urals, Central Russia, Volga region, the Baltic Sea, Transcaucasia and other regions of the world. In the variety of landscapes of Peter Vereshchagin, a special place is occupied by the views of Moscow – a city that the artist loved and to which he repeatedly returned in his work.

“View of the Moscow Kremlin” is one of the most famous paintings of the artist. The canvas depicts a clear day on the embankment of the Moscow River. In the foreground, you can see people, each doing their own thing: some are trading, others are concentrating with each other, while others simply stroll slowly along the river. On the opposite shore, on a hill, the majestic ensemble

of the White Kremlin sprawls out. High above the center rise the Kremlin towers in the sky, the masses of palaces, the domes of churches and the Ivan the Great Bell Tower. Both in the Kremlin and on the ancient Kremlin embankment with a pier you can see small figures of people, but they are absolutely insignificant compared to the great creations of medieval architects who built Moscow for many centuries.

Painting Vereshchagin created in the late 19th century. When looking at the images of the Moscow Kremlin of that era, one can clearly see the features that distinguish it from the modern one: at that time its walls were white rather than red as now, and the towers were crowned with royal eagles. In the picture you can distinguish some buildings that have not reached our days. The landscape of Vereshchagin, reflecting the features and spirit of Moscow of his time, was highly appreciated by the artist’s contemporaries, and now occupies a worthy place among the ancient panoramic views of the city.