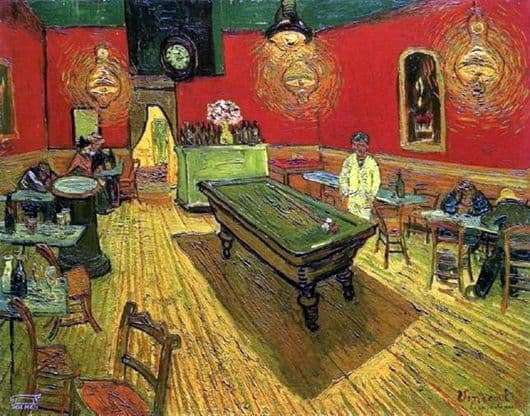 According to Van Gogh himself, the painting “Night Cafe” was created in order to convey the effect of a look at the environment of a public institution through the eyes of a drunk person whose thoughts, understanding of what is happening and his mind are clouded by awakened drunkenness.

The painting was made on an industrial primed canvas. The painting shows the interior of the cafe. The accent of the central background is the curtains, casually drawn by Van Gogh’s light hand. This negligence of all lines and gives a feeling of mild intoxication, and even some dizziness.

Surprisingly accurately conveyed the artist, the feeling experienced by the visitors, also depicted on the canvas. Five clients, who for various reasons, fate brought in this night institution, settled down at tables along the walls. Tables are arranged so that the waiter in a white suit without problems was able to serve each of the visitors.

In the picture it is impossible to see either the clear outlines of the faces of the visitors, nor the lines of the interior. Apparently the same is seen by those who decided to visit the cafe that night.

The center of the picture is a billiard table, to which visitors are in no hurry to approach this night to play a game. A lot of alcohol is depicted in the background of the picture. Apparently with this, Van Gogh gives one more time to feel the purpose of the arrival of people in this cafe. Van Gogh depicts this picture through the eyes of a visitor sitting at the very end of the hall, and watching everything that happens in this “foggy” room.

The predominance of green in the picture is not accidental. It is such a shade of green that gives a feeling of self-destruction and loneliness. At the same time, bright red walls give a feeling of anxiety, fear and anxiety, which unhappy visitors will soon forget for a while.

Van Gogh’s Night Café is a place where everyone can pour a glass of his adversity, another cheap and not very brandy or whiskey. Moreover, each client, depicted by Van Gogh, apparently has his own definite life story, which is radically different from the story of another visitor who, by the will of fate, turned out to be in a night cafe.