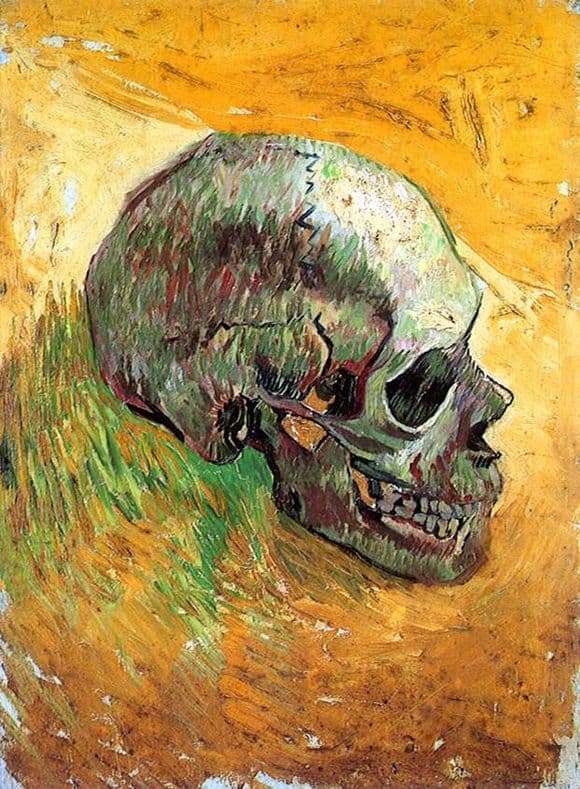 The picture with the skull belongs to the Antwerp period of the artist, when he studied at the Royal Academy of Arts, receiving a classical university education.

Skeletons and skulls – as the basis of anatomy – were mandatory in the program of academic drawing. In the period of formation of the creative style of the artist he needed many hours of practice. Among the “anatomical” paintings of Van Gogh, one can also list such paintings as “The Skull with a Burning Cigarette”, which became a kind of “riot” against the bored skull workouts.

As you know, a long period of time the main theme of the work of Dutch artists was the image of peasant life and life, reverent attitude to human images, which were grafted on Vincent van Gogh. The portrait painting genre, which was hardly given to Van Gogh, did not receive due development because of the anatomical practice in the Academy of Art. Those paintings that the community of people of art appreciates very highly the artist himself sharply criticized, embarrassed by his own “inability”.

Wide and confident strokes form an excellent cranial volume in the Van Gogh picture, harmonious circular arrangement of strokes with ocher flowers, green and black create a special dynamic of a static depicted object, such magic of the brush is peculiar to all the works of Vincent Van Gogh, and was noted already in his student years. The sharp lines that mark the boundaries of the transition from one bone to another, the bottomless, black pits of the sockets – all this indicates that the artist liked living people much more.

“Toothy skull” with sharply outlined sharp nose looks frightening, as if the jaws are about to open and tell the viewer something malicious, amazing. This feeling is created thanks to the clarity of the forms and the play of colors in contrast created by the artist in the early stages of his training.