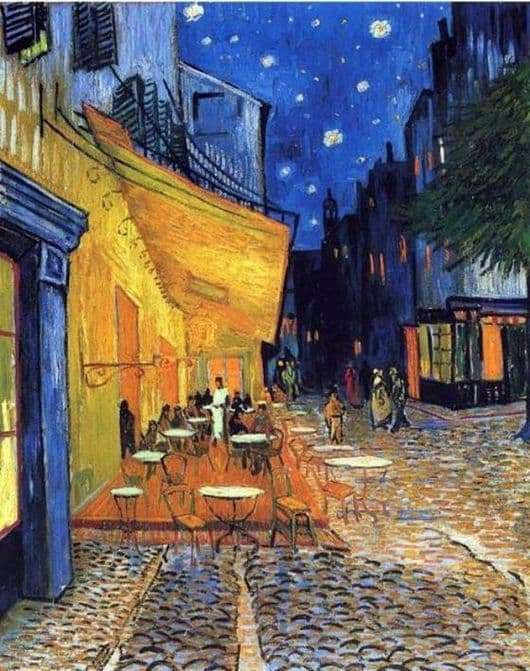 When creating his painting “Night Cafe Terrace”, Van Gogh did not use black paint at all. But hardly anyone would argue that the canvas is not depicted at night. This canvas was created in the so-called Arles period of the painter’s work (at that time the yellow palette of shades was clearly dominant in the works of the artist). This canvas also confirms the presence in abundance of the author’s favorite color.

Looking at the canvas, you can even feel that this color shade, filled with a very rich and bright glow, which, as if appearing from the inner depths of the canvas, strongly denying ordinary everyday life and boredom.

There are suggestions that during the creation of this canvas, Van Gogh tried a fundamentally new approach to reproducing the surrounding reality: he did not paint the night terrace in his workshop, as they usually did, but worked directly under the night sky. As is known from journalistic reports, the artist used candles attached to his hat to work in the dark.

There is no actual evidence that would confirm the presence of such an extraordinary headgear. Only once this is mentioned in the correspondence, where the author notices an unfair approach to the role of one candle, and in fact it is quite enough to exclude the appearance of a “traditional night, with a whitish and cold light…”

The whole composition “Terrace Cafe” is viewed by researchers and critics as an option very similar to Anqueten’s famous work “Avenue de Clichy in the evening”. In general, Van Gogh’s “Cafe Terrace” is dominated by a purely positive attitude, thanks to a very original lighting solution, which allows the simple viewer to perceive the canvas as an object of material and spiritual values.