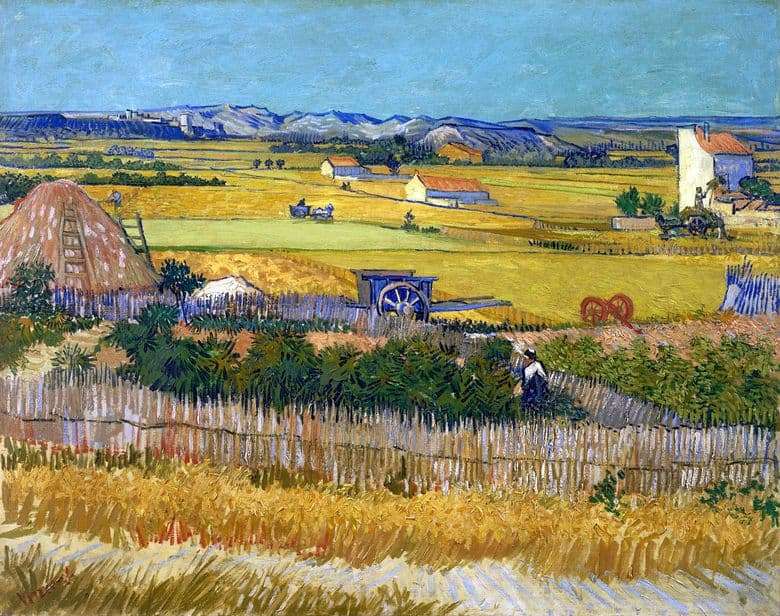 The “Harvest” landscape was painted by Vincent van Gogh in June 1888 on a hill overlooking fields in the vicinity of the Abbey of Montmajour. In the open air that summer in the south of France in Provence, the artist wrote a series of landscapes about the harvest process. On all canvases, Van Gogh depicted working peasants, as if singing them for such a difficult work. The “Harvest” painting was also included in this series, also known as “Harvesting” and “Harvest in La Cros, and Montmajour in the background”.

In a letter to his brother Theodore, Van Gogh admitted that writing summer is much more difficult for him than spring. But he coped with the task before him and was very pleased with the result.

In the painting “Harvest”, the artist depicted a hot summer day, the delightfully yellow colors of the endless fields convey all the brightness and warmth of the sun’s rays. The canvas seems to glow, as if it itself radiates sunlight.

The deep blue of the horizon, as if immersed in the azure sky, shading a wide space.

The bright yellow fields that stretch into the distance are diluted with shades of light green that make it possible to recognize the line between the individual fields. Lush stripes of trees, buildings, roads create horizontals and verticals on the canvas, which gives the picture a visual volume. The landscape as if comes to life and integrates the viewer’s eye into itself, conveying the full atmosphere of the hot day.

Despite such a miniature size of the figures of the peasants, the artist managed to prescribe in detail their work.

For Van Gogh, it was very important to capture the harvest process on the canvas. He managed to portray the main stages of this process.

He was very pleased with the picture he painted and gave it the name “Harvest.

To date, the picture Van Gogh’s “Harvest” is in the Van Gogh Art Museum in Amsterdam.