Home ⇒ 📌Van Gogh Vincent ⇒ Description of the painting by Vincent Van Gogh “In the evening: the end of the day” 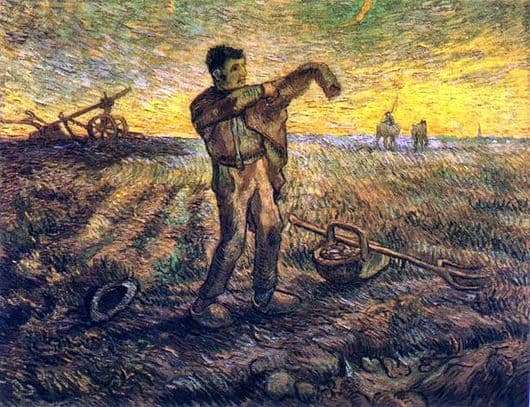 “In the evening: the end of the day” – one of a hundred and fifty paintings created by Van Gogh in the last year of life. It is written under the influence of the same sketch by Jean-Francois Millet. Only by working with black and white sketches, Millet Van Gogh created twenty-three paintings in those months.

The artist did not consider the transfer of Millet’s drawings to a tree or canvas by copying. He called it a translation into the language of colors, impressions, light and shadow.

Talking about the work on the picture, Van Gogh said that he uses Millet’s sketches as a normal life story. And then improvisation begins over the light. Partly the light, according to Van Gogh, is “remembered” from the original. Such a “recollection” is the author’s interpretation of the picture.

priest. Gloomy Priest, interrupting the usual natural cycle. In the picture described, it is rather the sower who has completed the work and is about to go home.

The picture is not an exact copy of Millet’s work. Only the plot is taken. Here is a completely different field, on the ground there are other tools. The shape of the worker is also different – we see the usual tired after a long day of work a man trying to pull on a battered jacket and barely got into the sleeve with his left hand.

When working with such black-and-white reproductions, the artist not only develops a unique color scheme. He also highlights the forms. As with real models, he searches for “knotted and broad lines.”

Van Gogh himself believed that such copying could be more beneficial than his own painting. It is known that in all his life he managed to sell only one painting. Ironically, a century later, his paintings go for tens of millions of dollars.

The canvas is included in the permanent exhibition of the famous Japanese art gallery Menar.