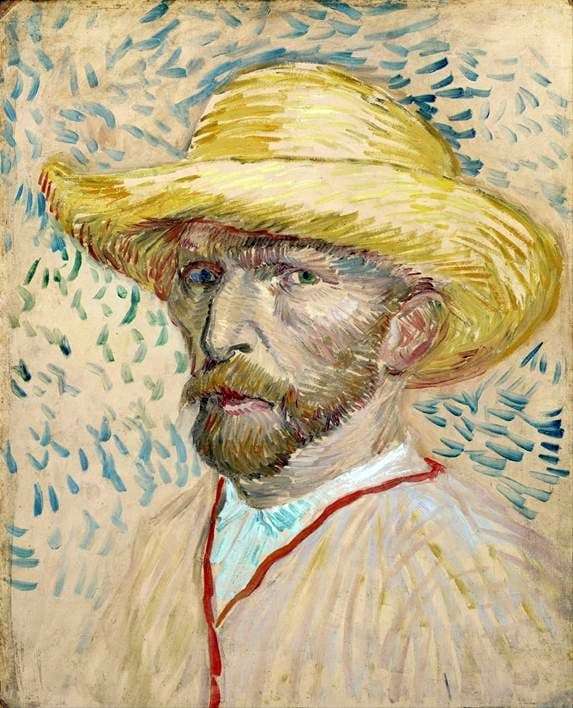 Portraits Van Gogh began to paint in Paris, and here he began to devote a lot of time to writing self-portraits. He wrote dozens of works on this subject, but one of the most popular was the “Self-portrait in a straw hat,” although the work looks somewhat unfinished.

There is no background in the picture; it is indicated only by chaotic blue-green strokes of different saturation. The shade of paper is the color of the face. Only in some places are marked shadows. To do this, the artist uses gray and purple colors in various combinations. Slightly traced the glare on the skin. But the eyes, lips, beard are drawn very clearly, all the details are marked. One gets the feeling that Van Gogh singled out the most important thing in the image, and outlined the rest only as an addition to it.

Much attention is paid to the artist and accessories, in particular a wide-brimmed straw hat, a white shirt. The artist places such peasant additions to the image to the fore and makes the contemplator unwittingly pay special attention to them. Incidentally, this option is not the only one where the artist writes himself in a straw hat.

The main color on the canvas is yellow, it is to him that Van Gogh prefers. Perhaps it was planned to compare the sun shade as a contrast to the bright blue background. Only a few lines are drawn exactly, the rest of the space is almost transparent. And thanks to such a move, the portrait is repentantly light and airy, it is somewhat reminiscent of watercolor painting.