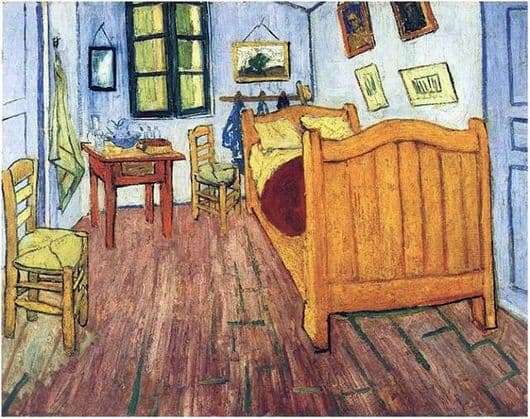 The first option The second option The third option During his stay in Arles, Van Gogh painted his bedroom. For several days he was sick and was bedridden, and this explained his desire to paint this particular room. In fact, there are three versions of the picture. 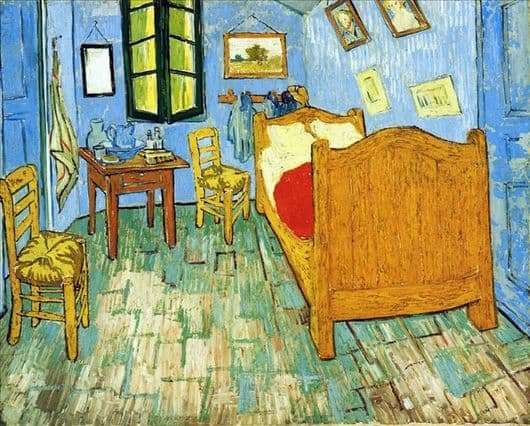 The first version of the picture the artist wrote in 1888 and sent a sketch to his brother. Van Gogh wanted the painting to have a calming effect. Especially for this wall painted pale purple. A wooden bed and a yellow chair that was Van Gogh’s favorite color, and a scarlet coverlet. When the window image is green, the shutters themselves are closed. With these different colors, he wanted to express absolute peace. Currently this picture is in the Van Gogh Museum in Amsterdam. However, the canvas, which was the brother of Theo, was damaged during the flood. That is why Van Gogh painted the second copy of the picture. Although all the items have retained their location, some colors have been slightly changed. Since 1926, the picture owns the Art Institute in Chicago. 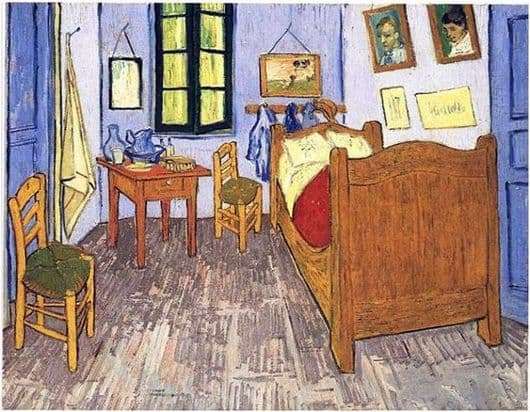 In 1889, he drew small copies of his most successful works. He presented the third copy of “Bedroom in Arles” to his sister. And since 1959, the picture is in the museum Orse in Paris. In the work used bright and bold colors. An unusual aspect of the picture is the curved image of the bedroom, which makes it unique and easily recognizable. Through the colors and methods of applying paint, Van Gogh expressed character and emotions. Perhaps the image of the bedroom conveys a sense of well-being and economy in your own home. The bed, strong and simple in appearance, personifies calmness and security. And clear contours cause a feeling of stability and stability. Although the work was not recognized during the life of the artist, she had a great influence on the next generation of artists.