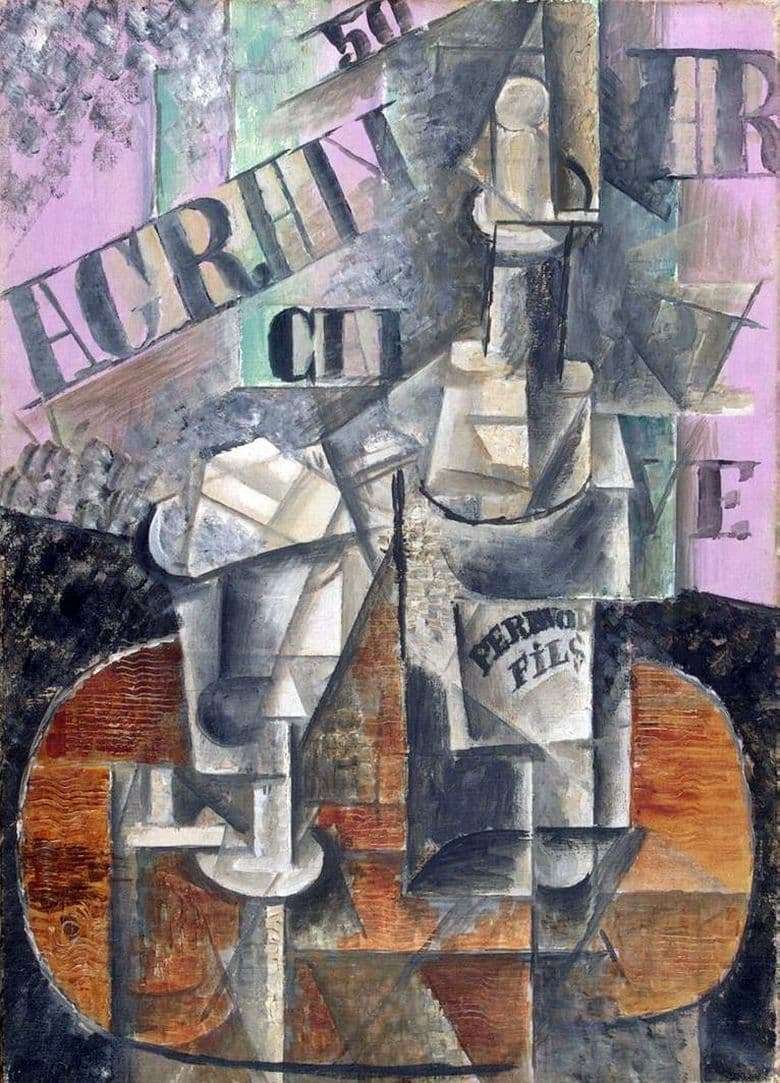 In 1912, Pablo Picasso wrote a very original painting “A Table in a Cafe (Bottle Perno)”. This is a kind of still life of the artist’s favorite drink, which he often portrayed in his works, but for the first time on this canvas was an attempt to depict a bottle of absinthe in a new style of cubism.

During this period of creativity, the famous artist often resorted to an unusual technique of writing, in which objects were depicted in the form of small homogeneous parts or broken mirrors, without smooth and harmonious structures.
Looking at the picture, we see a small wooden table, which is located in the cafe. On it stands a bottle of Pernod and a glass on its stem next to it. These two elements are made in gray-green tones. Behind the main subjects of the still-life, our gaze clings to the clear letters that make up the fragments of words and numbers. The picture is literally saturated with dynamics, stirring up the head, like absinthe, which we see on the table.

Pablo Picasso is one of the first founders of cubism. In his work “A Table in a Cafe (Bottle of Perno)” he demonstrates that in order to perceive a common subject, it is enough to abandon the plausible accepted norms of the image, demonstrating new writing possibilities. All elements are depicted as a set of graphic volumetric objects enclosed with the help of a color palette into one aggregate forming the presented object in our mind.

After gaining the long-awaited popularity, Pablo Picasso became associated with the audience mainly as the founder of cubism. But the artist was not satisfied with this state of affairs, because he wanted only to convey his creative thought and idea of ​​his work in such an unusual way. The painting “A Table in a Cafe (Bottle Perno)” was one of the last masterpieces of Picasso, written in this unusual style.