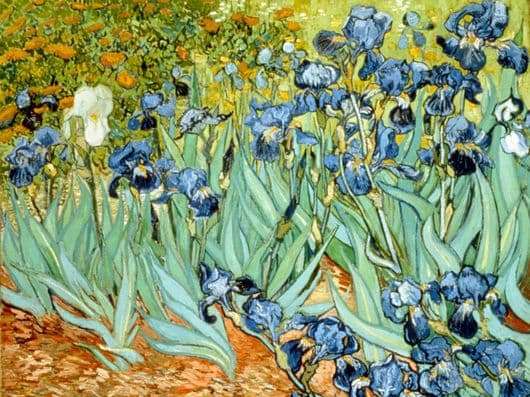 This famous painting by the Dutch artist Vincent van Gogh was created by him in 1889. “Irises” were one of the last works of the great master. A year later, Van Gogh died. At the time of work on the painting the painter was already incurably ill. He was constantly under the supervision of doctors in a clinic for the mentally ill. This clinic was located near the picturesque town of Saint-Remy-de-Provence.

Perhaps the disease so influenced the creative style of Van Gogh, but the picture turned out completely different from all that the artist has written so far. This is not the Van Gogh, who knew. There is no tension, anxiety, thick paints and warm olive-mustard shades in the canvas. On the contrary, there is some kind of lightness, airiness and transparent weightlessness. Painting in style of execution resembles Japanese prints.

In the painting “Irises”, Van Gogh depicted a part of the field entirely covered with flowers. Here we see not only the irises, which gave the name to the masterpiece, but also other flowers. Of course, irises are central to the composition.

The artist chose an unusual angle for his picture. Flowers fill almost the entire surface of the canvas. It seems that you are squatting in the middle of the field, in the thick of flowers. But the image does not look frozen, static. The composition is built so that the view involuntarily rushes diagonally up and to the left. Present in the “Iris” and a kind of symmetry. So the ground spot in the foreground is balanced by orange-yellow buds in the upper left corner. White iris and pale blue keep the picture horizontal.

The influence of Japanese painting is noticeable, first of all, in the drawing of irises. The same clarity and subtlety of graceful lines, the same continuous fill with the color of individual parts. But the picture is not fully sustained in this style. Here you can see the impact of impressionism. And the most amazing thing is that such a mixture does not violate the harmony of the image. It only adds to the creation of Van Gogh uniqueness and attractive charm.