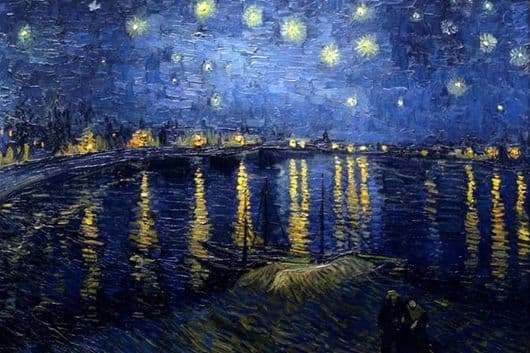 The sketch of the film “Starry Night over the Rhone” was painted by Van Gogh in 1888, and the painting itself was completed and exhibited in 1889.

The oil painting is written in large strokes and its main colors are multiple shades of blue and yellow, turning into pale blue, now greenish-bronze, now bright gold.

What is the author of the picture captured on his canvas? Firstly, this is the night starry sky itself, on which we can easily find the Big Dipper bucket and the Polar Star, which allows us to understand where this landscape came from. Dark blue at the edges it becomes light blue in the middle. Yellowish-white stars sparkle, resembling small flashes of fireworks, and are surrounded by white with shades of green halos.

The next element of the composition is the opposite bank of the Rhone, on which a blue, almost merging with the sky is built, a city whose lanterns shine with a rich yellow color. Being close to the stars, they create a very strong contrast to the pale yellow stars. The light of lanterns falls on the entire surface of the river, acquiring golden and green shades.

All the attention at first glance at the canvas attracts the sky and the river with bright lanterns to itself, and only then the part of the painting closest to the viewer is honored. A modest walking couple, most likely an elderly couple, walks along the Rhone arm in arm, and two small vessels calmly stand near the coast, adding even more pacification and harmony to the picture.

A very loving artist like night-time landscapes, the artist loved to dream and to drown in his thoughts, looking at the stars. He was attracted to them, he was fascinated by their beauty and inaccessibility. In his thoughts about life and death, about the inaccessibility of these small bright points and there was born in him the desire to convey the same emotions and feelings that gave rise to walks in the open air. And today, after more than a century, we also admire the beauty of the night landscapes in his paintings.