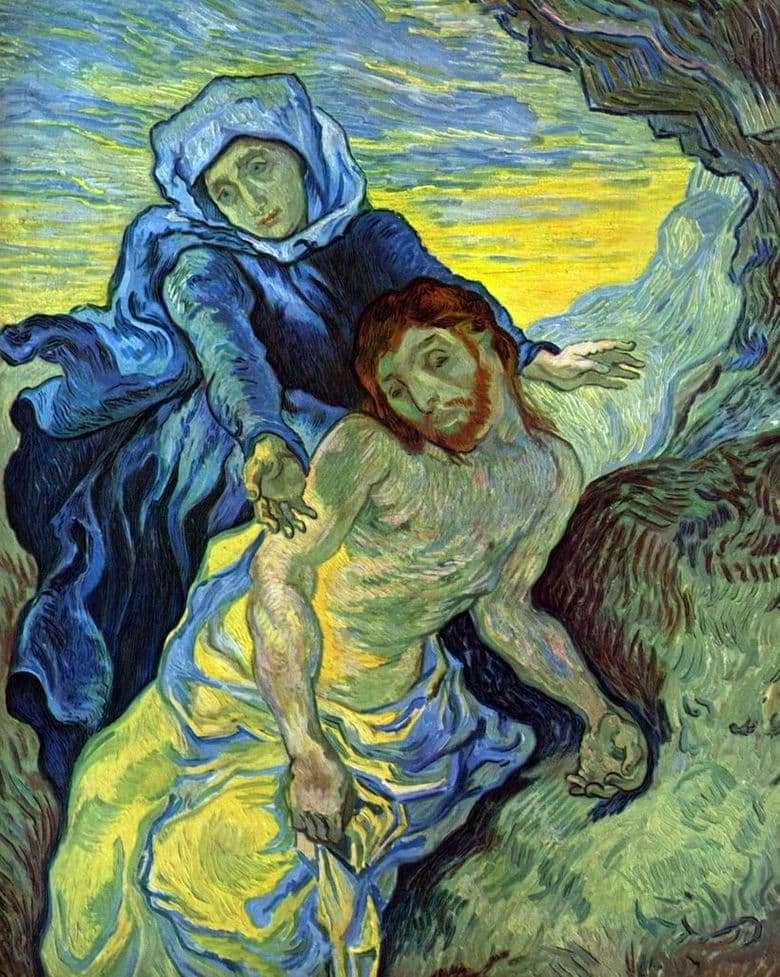 Vincent Willem van Gogh painted the Pieta in 1889. It was made on canvas with oil.

The picture was painted by the artist at the end of his life, during endless depressions and creative searches. However, despite the tragedy of the events in the life of Van Gogh, this period is the heyday of his work. In recent years, the artist has depicted more than one hundred and fifty works.

The painting “Pieta” appeared in the artist’s creative heritage by chance. Van Gogh dropped the lithograph from Eugene Delacroix’s Pieta painting into paint and spoiled it. The painter admired the works of Delacroix, tried to understand their execution, the technique of writing. Very regretting what happened, he decides to reproduce the lost canvas.

The picture was made in a peculiar creative manner of the artist’s letter, which by that time had already been fixed in many of his works. Dark tones and the dynamics of light convey the tragedy of the plot.

The canvas depicts the Virgin Mary mourning for Jesus Christ. The outstretched arms of Our Lady embrace the dead body of her son. The gentle expression of her face indicates the inevitability of what is happening. The smoothness of the lines used in writing the body of Christ convey his lifelessness. The plurality of feelings shows the painter, both through the images of the characters themselves, and in the surrounding landscape.

Art critics believe that Van Gogh depicted Jesus Christ on this canvas, identifying his image with himself. Misunderstood, suffering, ridiculed by people and unrecognized in life – all this was characteristic of the artist. Many also find external similarities.

The biblical story is not typical for the work of Van Gogh, but at the time of its writing this topic was close to him. He understood the basics of Christianity and yet was completely devoted to painting.