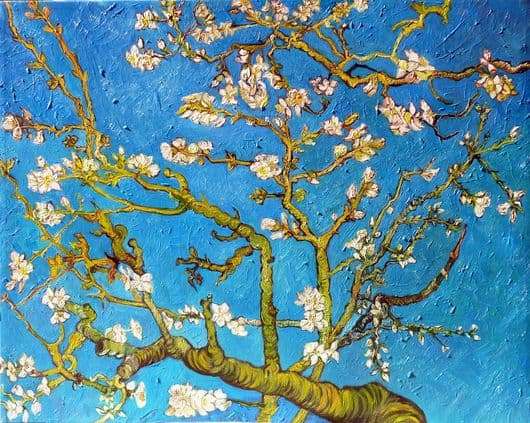 Vincent Van Gogh is a Dutch artist with a very sad fate. During his short life, he managed everything and nothing at the same time. During the creative journey, he could not earn respect from his colleagues, customers, and remained unclaimed until the end of his days. But after his death, Van Gogh won recognition and fame. He became famous throughout the world as an impressionist, although he repeatedly rejected this proposition. Today, he is one of the most recognizable artists, along with Pablo Picasso. Van Gogh turned out to be a very prolific author, after himself he left a huge creative legacy and many followers. The painting “Blossoming Almond Branches” (Almond tree in bloom) was one of his last works.

The artist wrote it in the winter of 1890, after his brother Theo told him about the birth of his nephew. The picture is a symbol and carries a deep undercurrent. The branches of almond blossom very early and, according to the author, they mark the beginning of a new life. Van Gogh always used vivid colors and a lively composition. This canvas is remarkable in that it is made in a manner uncharacteristic of the artist, and the color scheme is rather limited. The yellow color that characterizes van gogh is missing. Turquoise sky looks bright and carefree, not a single cloud overshadows this beautiful spring day. On a spectacular backdrop of flowers, a harbinger of spring, warmth and joy of life.

The compositional decision is not entirely clear: it is part of a bouquet on a bright background or branches of a tree that float above the endless sky. The entire space of the picture is occupied by almonds, so masterfully written by Van Gogh. The artist managed to sustain the rhythm of the canvas. Clearly visible excerpt self-discipline and clarity of the line, peculiar only to Van Gogh. In his letter to his brother, Van Gogh said that this is his first job, of which he is justly proud.