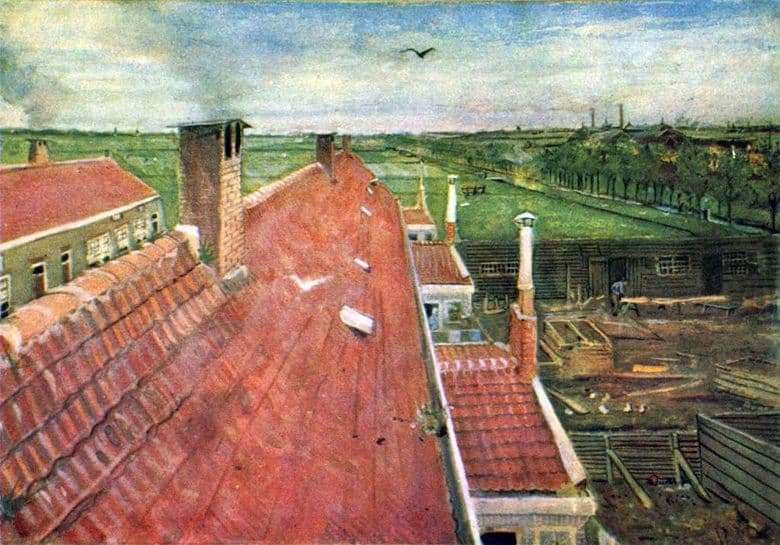 The painting “Roofs. View from the workshop “was written by Van Gogh in July 1882, while he was beginning to master the basics of painting and drawing.

This picture refers to the early period of Van Gogh. Despite the fact that it was an educational work of the artist, he coped with it perfectly, clearly built the composition of the landscape and harmoniously brought all the horizontal lines to a single point on the horizon.

The tiled roof, saturated red color, occupies all space of the left part of a cloth, leaving deep into space.

To emphasize the volume of the image and dilute the horizontal, Van Gogh adds vertical lines in the form of porches attached to the building, the roofs of which are of the same saturated red color.

In the background, the gaze opens up to the endlessness of green meadows, clearly traced outbuildings and the expanse of a blue sky.

The color combination of rich red juicy green gives the picture brightness and beauty. Light strokes, which the artist wrote the clouds in the blue sky, add lightness to the image. But dark clouds of smoke from the tubes of buildings returns the viewer to the realism of the landscape described by Van Gogh. The outbuildings in the courtyard, light smoke from the chimneys, the tile texture of the roofs are inscribed masterfully and in every detail.

In general, the picture conveys high spirits, expressed in the clarity of the picture and the chosen coloristic solution.

As you know, in order to achieve an interesting and surprising color solution in his works, the artist used a mixture of several techniques in one work. So for writing the picture “Roofs, View from the Studio” Van Gogh used a mixture of two techniques – watercolors and chalk.

At this time, the picture of Van Gogh’s “Roofs. View from the workshop “is in the private collection of Jean Renan in Paris.