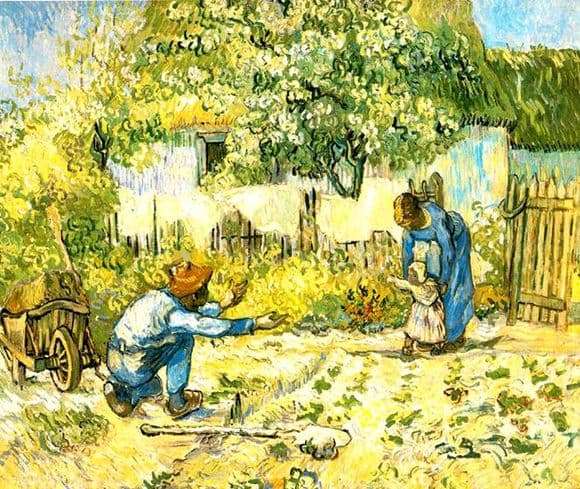 Van Gogh eschewed traditional art, and used broad strokes and paints to express pure emotions. This style of the master distinguishes his works among other post-impressionists. He was interested in people, their essence, human feelings. He used free pure color to express a theme.

When Van Gogh decided to become an artist, he realized that he needed to learn a lot. He began studying textbooks on anatomy and perspective, and also copied the works of Mullet, a French artist and founder of the Barbizon school. The beginning artist was impressed by the plots of rural life, the monumental simplicity of the figures, with recognizable poses and gestures.

“First Steps” is one of those subjects that Van Gogh interpreted. Here, we learn not only the person as such, with his misfortunes, hopes, disappointments, but also a truly deep relationship to art and the essence of man. In the image of people can not see superficial judgments.

Before us is a man of intellectual, spiritual and honest. In the 19th century, a special theory of color was born – color accuracy – pointillism, consisting in the denial of a solid tone and the division of the surface into components.

Color and painting were freed from the techniques of the past, and replaced by the transfer of impressions and images of objects with the help of color solutions, contrast and whole painting parts. Thanks to the new color theory, it was as if rediscovered its properties and applications.

Here the color speaks for itself, the eye, looking at the picture, mixes the colors on the canvas. The color occupied Van Gogh most. He gains considerable weight with which the artist conveys his feelings and reactions.

Vincent Van Gogh had his own philosophy of painting, which he likened to music. His colors are thick and saturated, but at the same time harmonize with each other on the canvas. At the heart of the picture is not a drawing and not an image of people, but the personal attitude of the artist and symbolism.