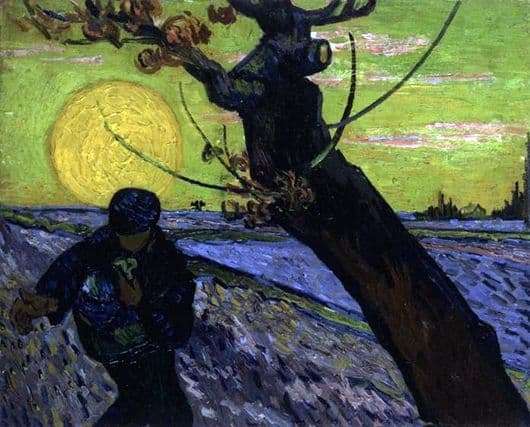 In 1888, the Dutch artist Van Gogh painted his next masterpiece of art, The Sower. The work is done in oil and has dimensions of 32×40 cm. Nina is stored in Amsterdam at the Vincent Van Gogh Museum.

The artist was obsessed with peasant themes in his works. On his account there are several different paintings with images of the sower. When writing the first canvas, Van Gogh was inspired by the canvas of Jean-François Millet. The artist is not without reason portrayed the sower. His image is endowed with universal meaning and scale. After all, the sower personifies the symbol of eternity. He seems to be the messenger of the Sun to Earth. His figure supposedly descended on the field on the solar steps.

The picture directly above the horizon line and over the golden wheat depicts the sun disk, creating a bright nimbus above the human head. There is something in common between the sun and the sower. Man scatters seeds across the field, just as the sun spreads its rays in the sky. Only sunlight is poured up, and the hand of the sower is pointing down. At the same time the seeds fall into the soil, and then germinate, new plants appear. Thus, the sower is a symbol of infinity. The life continuous process of the revival of nature is shown.

The artist struck by the speed of creation of the canvas. Van Gogh did not make a preliminary sketch. He longed to write a picture, as if his thoughts were ahead of actions. The master immediately began to paint in oils. With each new stroke, precise straight and wavy lines were born.

A tree appeared in the foreground, which gave the composition to the plane. The huge sun occupies most of the sky, which is colored bright yellow. The artist gave the field unusual purple-blue shades. At a time when the sky should be blue, and the field is yellow, he seemed to have swapped everything. Van Gogh displayed in the picture his vision of reality.