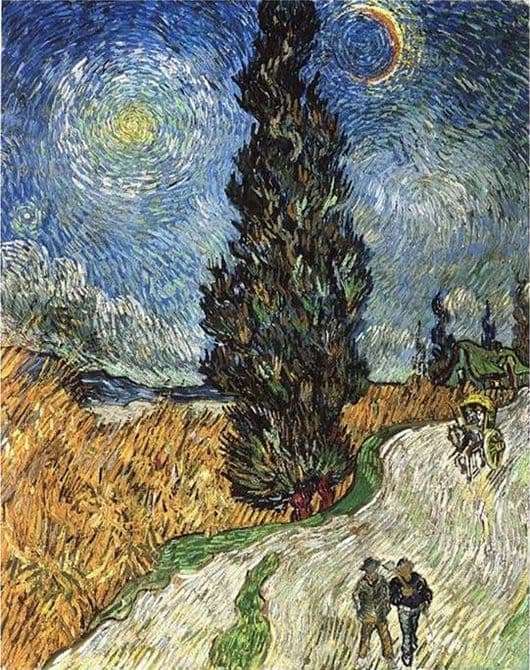 The picture “Road with cypresses and a star” Vincent Van Gogh wrote already in a madhouse in the vicinity of Saint-Remy. It was the last year of his life, when periods of madness were interspersed with periods of enlightenment. Over the past year, Van Gogh created one and a half hundred paintings and more than a hundred drawings.

The main pictures of the last year are landscapes and still lifes, in which nervous tension combined with dynamism is especially noticeable. In the picture described there is a long winding road leading past the old hotel with light barely visible in the windows. In the center of the picture – a huge straight cypress, gloomy, as well as the state of mind of the artist during this period.

The upper part of the canvas is a majestic panorama: a tall yellow reed, created by long brush strokes, sharply outlined trees and clouds. Refinement and delicacy in the work remained with Van Gogh even during the period when he created 2-3 paintings and several drawings per week.

The psychologist can find in this picture a reflection of the artist’s fears. The road passes by the hotel and goes nowhere, the field and the sky compete in coldness. Several people are visible on the road.

This work is also interesting for astronomers. The artist depicted a new moon, a narrow sickle, turned to the cypress. That was what the moon looked like at the time of the painting in mid-April 1890. On the left, the artist depicted two more objects – Mercury and Venus. It is interesting that he painted these two planets in a mirror image. However, the moon remained unturned.

This is not the only van Gogh experiment with an inverted sky. One of the most famous of these paintings is the “Starry Night”, in the center of which is a star spiral, resembling a mirror image of a galaxy. Today it is hardly possible to understand what the inverted sky meant for the artist. Three months later he died.