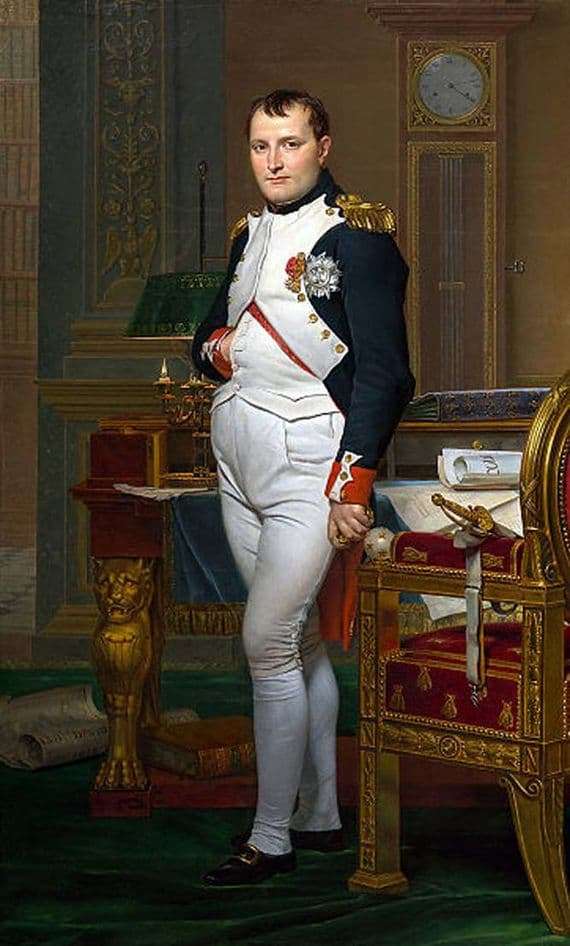 The picture was painted in 1812 in oil on canvas.

David is a brilliant artist of the 19th century. His portraits are known all over the world and stand in the same row with the greatest artists. The portrait of Napoleon was painted by David when the period of classicism dominated in painting.

It is believed that this image of Napoleon is the most truthful and accurate. The French commander appears to the viewer in his personal account. Its interior corresponds to the nature of the owner. Napoleon paid special attention to what should be depicted in his portrait.

Around everything is lined with luxurious, expensive furniture with expressive elements of decoration, there are a feather and an inkwell, as well as the volume of Plutarch. The sofa, the armchair and the empire table are very massive, corresponding to the personality for which they were created.

An old clock that knows how much Napoleon spends his life time working in the walls of this room. The emperor is depicted as a hospitable host, who gladly accepted the artist. He looks solemn, due to white clothes.

On his chest are awards. We can also see the rolled-up papers with which the emperor worked before David came to him. The candle is burning down, telling us that the night was long, and Napoleon worked by its light. Of course, the image of the commander in his office can be seen in the genius of the artist.

This work of David was not the only one where he portrayed the emperor of France. But she was the final one. Here, Napoleon is no longer a young, slightly stout man, tired of past battles.

David accomplished his task like no other. Not one artist of that time would not have coped with such hard and responsible work. Subsequent artists have paid less attention to portraits in ceremonial style.

The canvas is stored in the art gallery. Washington.