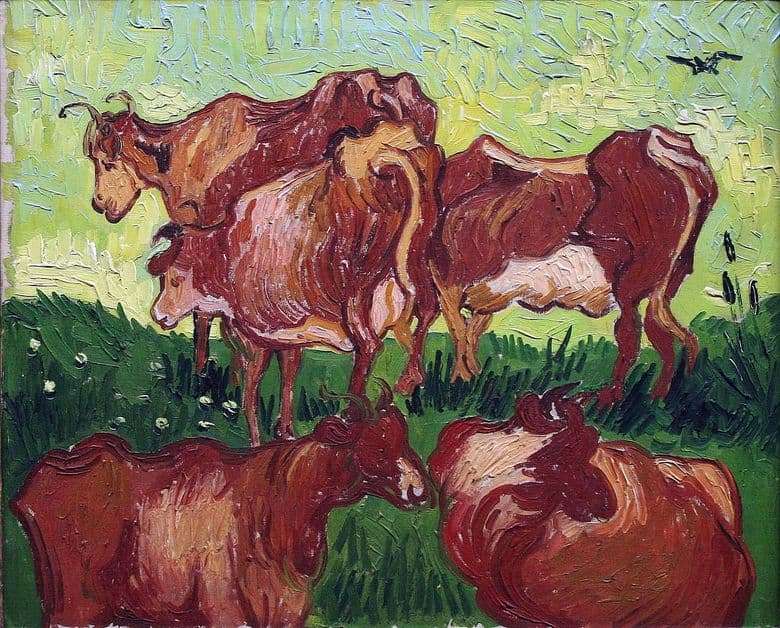 The painting “Cows” is one of the latest creations of Van Gogh. It was written by the artist in May 1890 in the city of Auvers. He was inspired to create it by etching Gachet, written in 1873 from a piece by Jordaens of the Lille Museum. Van Gogh was so inspired by this work in black and white that the very next day he showed the finished painting “Cows” to his friend Paul-Ferdinand Gachet.

The artist not only transformed it into color, he breathed his life into it, not only returning the color to the cows, but also creating a completely new environment around them, inherent only to Van Gogh. Now five cows of mahogany color were grazed on a meadow with a bright saturated green grass, on a green turquoise sun-drenched background.

The picture fascinates with its extraordinary contrast, dynamism, color and vigorous modulation of color gamut.

Van Gogh only conditionally, approximately reproduced the style of writing artists of the 17th century, to a greater degree he was impressed by the work of Jordaens with its expressiveness and genius. And he patiently outlined the contours and the power of strokes, approached the style of writing of the 17th century Flemish artists, but the vigor of color and accented strokes convey the personality of Vincent van Gogh. The whole palette of colors of the picture, the desire for purity of tone, the forcing of color, the thirst for sunlight directly indicates that this is a creation of a great artist.

In the picture “Cows”, both dynamism, color, saturation, brightness, decorativeness, and symbolism were displayed, revealing the essence of the writing style of Van Gogh. He did not copy the work of another author, but simply revealed in it the northern nature of his soul.

To date, the picture “Cows” is in the Museum of Fine Arts in the city of Lille in France.