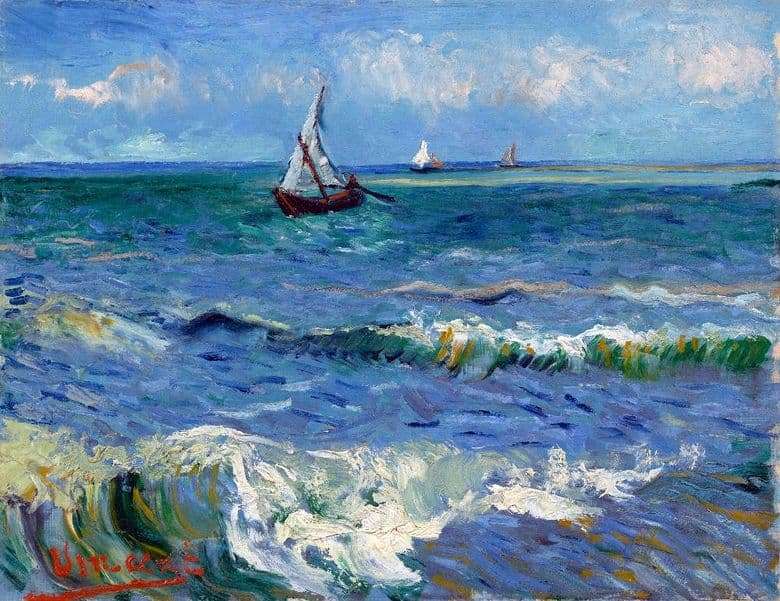 The painting “Seascape in Saint-Marie” was painted by Van Gogh in June 1888 on the Mediterranean coast of the fishing village of Saint-Marie. The sea inspired the great artist and in the Arles period of Van Gogh one can distinguish a series of paintings devoted to sea beauty. Then he wrote a lot of sketches and sketches from nature.

Even in a letter to his brother Theodore, Vincent wrote about the sea and compared its changeable color palette with the unstable color of mackerel, because it also constantly changes its color – “that is green, then purple; now it seems to be blue, and in a second it already takes on a gray or pink hue. “

In the painting “Seascape in Saint-Marie”, Van Gogh tried to reflect the very color variability of the sea. The artist wove a palette of blue, green and orange colors into a single plexus; the transition from one to the other recreates an extraordinary play

of colors. Life is felt in every play, the sound of the sea surf is heard. Van Gogh clearly accentuated the waves and the endlessness of the sea, merging on the horizon with the sky into a single unit.

He loved the sea and tried with every stroke to convey the realism of his feelings, which the Mediterranean Sea every minute originality caused in him.

The artist perfectly managed to convey the unsurpassed beauty of the sea and the continuity of its movement.

In the foreground, he depicted massive wave crests, and the main emphasis in the composition was made by a small fishing sailboat, which the wave tilted on one karma. Thus, he once again emphasized the infinity of the movement of the sea.

Van Gogh made his signature in the picture in red paint, which is not typical for him. He explained this by saying that he wanted to maintain the contrast with the green color of the water.

To date, the painting “Seascape in Saint-Marie” is in the Van Gogh Art Museum in Amsterdam.