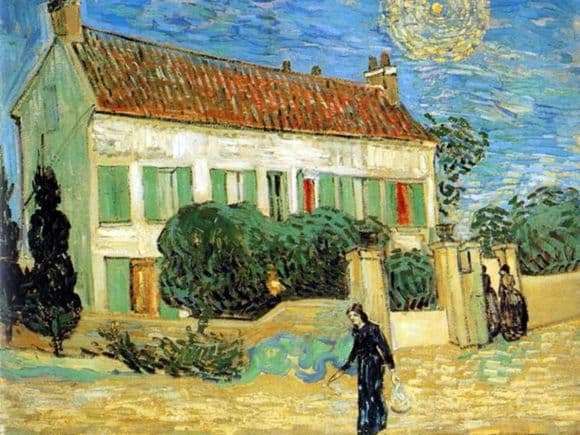 The painting was painted by the outstanding Dutch artist Vincent Van Gogh shortly before the tragic death. Moreover, the exact date of creation of the canvas is known – 06.16.1890, around eight o’clock in the evening. Such accuracy was established thanks to astronomers who explained that the star and the shining around it, depicted in the picture, are nothing but Venus. At the aforementioned time, it shone especially brightly, which attracted the attention of the artist, who captured Venus in one small French commune.

The masterpiece was lost for a long time from the field of view of artists, scientists, critics and culturologists, it was discovered only at the end of the 20th century: it was exhibited in the Hermitage in St. Petersburg and to this day belongs to this museum.

In 1890, the artist often writes at home. The latter personify for the master the bastion of security, peace, warmth, comfort. But, apparently, already feeling his imminent death, Van Gogh often adds dark shades to the pleasant shades, symbolizing anxiety and anxiety.

The technique of masterpiece performance is quite voluminous, which allows you to immerse the viewer – both an amateur and a professional – in the events taking place in the depicted town.

In this picture, we can observe this alarm: seemingly depicts a pretty white house, twilight, a shining star, in the creation of which the artist does not back down from his own handwriting; pastel colors also give peace of mind; On the whole, the atmosphere of a night provincial town is conveyed very accurately and peacefully.

However, in a woman, restlessly wandering out of the house on the night road, and in the very style of writing this canvas there is a kind of numbness, immobility, which give the picture shades of anxiety and even some nervousness. They were felt by Van Gogh on an emotional level shortly before the tragedy.