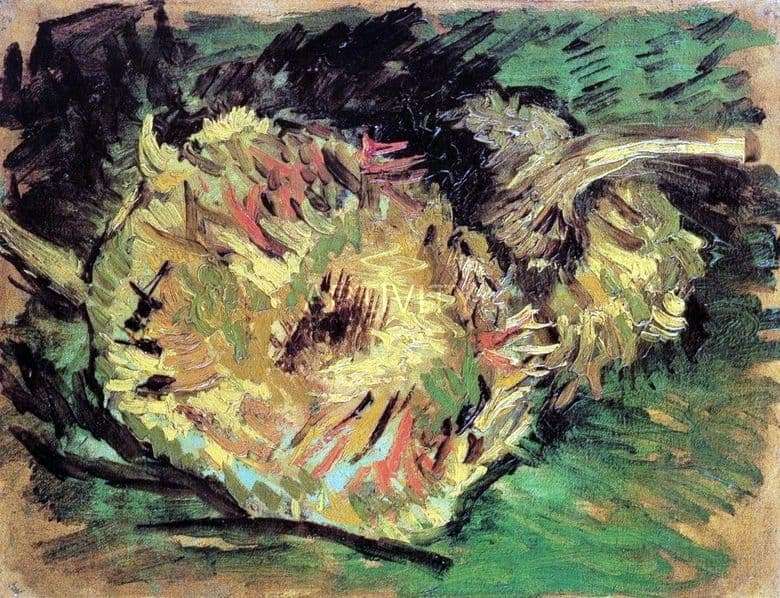 “Two cut sunflowers” – these are three paintings from the first series of the Paris cycle “Sunflowers”, written by Van Gogh August and September 1887.

In total, there were four paintings in the first series (four sunflowers were depicted on the first, and the next three – two). All of them depicted cut sunflowers, but the background is of a different color range. The artist is looking for harmony in the combination of huge yellow flowers and background.

In the first picture, Van Gogh writes two cut sunflowers like a sketch, sharp strokes, a mixture of different colors only structurally distinguish sunflowers on a dark green background, they do not have their own yellowness.

The color scheme of the whole picture is dull and dark, inherent in Van Gogh until the Paris period.

The second representative of the series “Two cut sunflowers” is already saturated with a riot of colors, mostly yellow and red palette, the flowers of the sunflower are already fully deployed with their “soul” to the viewer. The outlines have acquired clarity and constructiveness, the dark core of the sunflower and its yellow fading petals are already clearly separated. The background has also changed, there are practically no dark tones in it, bright paints have taken possession of the entire canvas. And the last picture of this series acquired a completely different style of writing. The composition as if was transferred from the first picture “Two cut sunflowers” and turned from a fuzzy sketch into a bright, screaming portrait of sunflowers. Harmony is achieved – bright yellow flowers on a bright blue background. Sunflowers seemed to come alive and strive towards the viewer, the progressive sadness of their withering.

Van Gogh associated himself with sunflowers who live in harmony with cosmic rhythms.

1. In the Van Gogh Museum in Amsterdam.

3. To the Metropolitan Museum in New York.