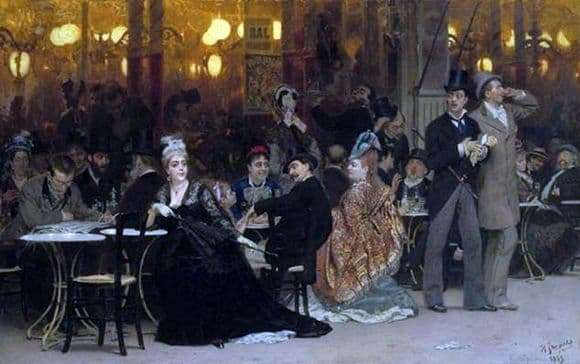 The truly Russian artist I. Ye. Repin shows us his vision of French life on the canvas of 1875 “The Paris Cafe”. Two years earlier, he received from the Academy the right to travel abroad to further study the craft of painting. Upon arrival in the capital of France, Repin was not impressed with the classics, his soul was attracted by the real life of the city and the emerging trends in art.

It so happened that the visiting Repin was here the first to create an impressionistic scene of rest in a cafe, much later followed by Renoir, Monet and other eminent creators of the era.

The Paris Cafe is a multi-figure painting, in the center of which is a single lady in black. If for a modern person nothing surprising will be noticed in this person, then even for a rather liberal Paris of the XIX century, she embodies provocation, ambiguity and audacity of a decent society. That is why the woman so attracted the attention

On the right are two figures in full growth: in a gray suit, most likely a native Parisian – confident, contented, he twists his mustache with a sly grin; under the arm with him follows the English gentleman, who even opened his mouth from the unprecedented courage of a woman. A busy waiter almost folds his neck, looking at the frivolous person. The family man sitting next to her is the one who observes expectantly. The rest of the rest are peacefully busy with current affairs: they read, eat or talk.

Repin had prepared sketches before; a woman in black was depicted as a “cocotte”, playing with an umbrella or as a person standing up from a chair waiting for someone. The bold, proud look of the heroine seemed too unacceptable to the artist, and he replaced it with a more modest look with lowered eyes. Already closer to the present, the upper layer was copied and removed – we had the original version of a colorful, theatrical and free Paris.